Old ‘bunker’? A mystery no more 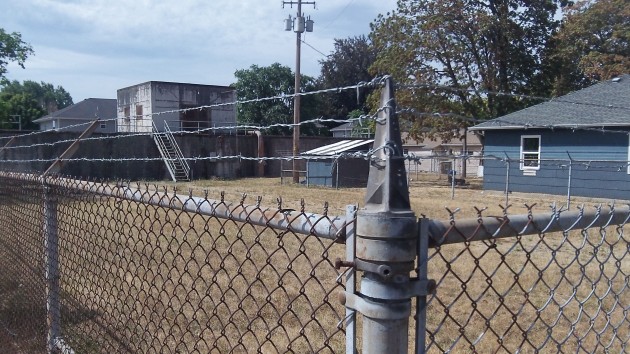 This address on Southeast Burkhart Street is protected by a sturdy wire fence.

Surrounded by chain link fencing topped by barbed wire, this bunker-like pile exudes a degree of mystery. What goes on behind the weathered concrete? Who climbs those stairs, and why? The answer, sadly prosaic, is that nothing has gone on there for decades, and probably nothing ever will.

The other day, Albany residents Mark Avery and his wife, Patricia Eich, took a walk around the neighborhood near Waverly Lake. Having passed this building, they wondered what it was and asked me via email if I knew. I didn’t, but on my next bike ride into east Albany, I detoured into this neighborhood off Salem Avenue and asked a couple of neighbors about the property. The city owns it, said one, but he didn’t know what it was. Linn County tax records easily confirmed the city ownership, but as to its purpose there was no clue.

If all else fails, ask. That’s what I did, and Chris Bailey, in charge of operations for Albany Public Works, came through as always. In short, this was part of the Albany water system when it was an operation of Pacific Power & Light. (In 1985, PP&L sold the water system to the city of Albany. Voters had approved a bond to buy the system, if memory serves, and in return city water customers got a 10 percent reduction in their water bills.)

“Here is what we have found out,” Bailey emailed me on Friday. “Please keep in mind this is somewhat assumption and speculation because no one currently working here was here when this facility was used.”

The structure, the Burkhart Street Reservoir, was built in 1963 and could hold 750,000 gallons of water. It has not been a part of the Albany water system for at least 25 years, which is as far back as the institutional memory of the city water department can reach. In any case, Bailey says any connections to the water system were severed when he reservoir was decommissioned.

“We have started looking into selling the property but have not gotten very far,” Bailey says. “It does not cost us much to maintain – just mowing occasionally – but eventually we will probably dispose of it.”

Even though the property is not taxed, county assessment records say the lot measures 15,486 square feet and has an assessed value of $45,480. The records include a note saying that in 1997 the $34,020 value of the “improvement” on the site was “removed as it is a detriment to the property.”

I don’t know, maybe somebody could make something cool out of an empty 750,000-gallon tank. (hh) 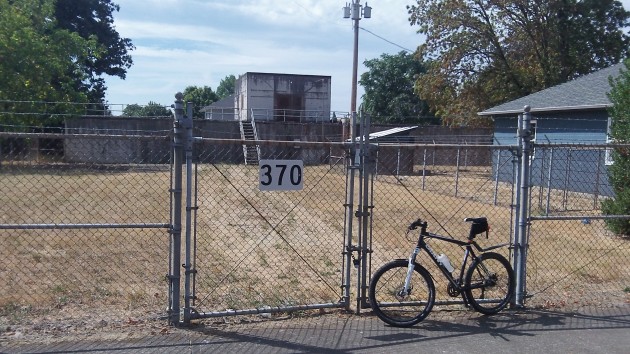 As a bike ride destination, it lacks a certain degree of charm.