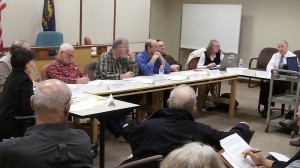 File photo: The Albany City Council at a work session.

So what exactly is “new debt”? It can be hard to agree on that point even though the words themselves are not especially tricky.

Albany voters approved an initiative amending the city charter on new debt. Basically, although there are some wrinkles, it says the city must get approval at an election for any new debt. I wrote a commentary saying that if this had been in effect last month, the city would have been barred from refinancing its water bonds and saving a truckoad of money. No, the sponsors of the initiative responded, that was refinancing an old debt, so the restriction does not apply.

I’m not convinced, because the refinancing bonds are obligations to new and different buyers of new bonds, obligations that replaced the old obligations to other buyers. So to me they are clearly “new,” even though from the standpoint of the debtor — Albany — they represent the same old debt with better terms.

As for what other types of obligations the measure might affect, nobody really knows. Tom Cordier, the sponsor of the debt initiative, offered to meet with council members to work out a workable arrangement. Trouble is that once the words are in the charter, they can’t be limited by any ordinance or agreement the council might adopt. Clarification likely can come only with court decisions over time. If the city sells, for a street project, bonds for a local improvement district, in which property owners ultimately pay off the debt, and if an opponent of the project sues alleging this violates the ban on new debt without an election, a judge will have to say the LID either violates the charter or it does not. (hh)

From Ryan Murphy, via Facebook: Either way the voters sent the message that Albany does not have an unlimited credit card. I think that was the purpose of putting this on the ballot. I am sure the courts will say “new debt” is not operational debt, like police and fire. While I have nothing against beautification projects, the ones that the city cannot afford and such would most likely fall under “new debt.”

From Mark Workhoven, via Facebook: I agree with Hasso. It’s a vaguely-worded measure that could actually end up costing Albany money, especially since the city could have to take a public vote every time something gets refinanced. Elections are expensive. I understand the need to not let debt run out of control, but most of Albany’s debt came from their new water plant, not from the CARA beautification projects.