Offers for ex-bank to be aired in public 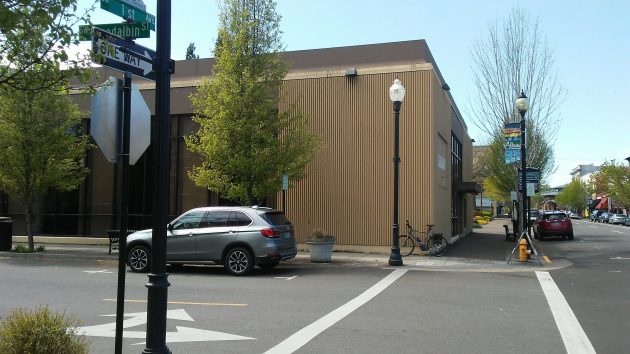 What happens with the former Wells Fargo branch in downtown Albany  — government offices, public parking, or private property used for commerce  — is so far undecided. But city officials now say the competing proposals or “offers to buy” should and will be discussed in public.

That’s in contrast to what happened before. On April 17, two groups of potential buyers presented their price offers and their visions for the property in an executive meeting, closed to the public, of the advisory board of the Central Albany Revitalization Area.

Since then, a third offer was made publicly. The Linn County Commissioners this week offered to buy the place for $1.5 million, the price the Albany Revitalization Agency had paid. (The ARA consists of the city council and is the governing board of CARA. By law it’s a separate agency of the city government even though it’s the same people.)

The county wants to house the county clerk’s office in the building. County Clerk Steve Druckenmiller does not want citizens coming in for election matters to be subjected to metal detectors. Moving his department out of the courthouse would allow the county to install security screens long requested by court employees who “at times do not feel safe in their workplace,” in the words of Roger Nyquist, the county board’s chair.

“The clerk is adamant that the public who access the voting process should not have to go through a screening process, and we respect that position,” Nyquist told me in an email.

The county’s offer is the third on the table, as far as I know. Seth Sherry, the economic development manager in charge of ARA and CARA staff work, would not be pinned down on that point. “I am not going to comment specifically on how many offers we have at this point, but there are several,” he said.

Sherry also reminded me that ARA does not have to take the offer with the highest price. Other criteria to consider include how well an offer to purchase and use the property furthers the goals of urban renewal, which include reducing blight and encouraging private investment to increase the tax base.

What happens next? The CARA advisory board on May 15 will talk about a timeline and other aspects of selling the property. And on June 19 ARA, the city council, is expected to decide on the sale. Some contractual issues may be discussed in closed session, Sherry said. (It’s not clear to me why that’s necessary since both any eventual contract and development agreement for the property will be public.)

“I fully expect, however,” Sherry told me, “that offers to buy will be discussed in an open forum moving forward.”

Mayor Sharon Konopa agrees that offers should be disclosed and discussed in public. “In my opinion,” she said, “an RFP should not be reviewed in executive session.” She meant offers, or the proposals themselves and not the requests for proposals or RFPs, but the thought is there. (hh)