Offer for city land in N.A.: Save it as is 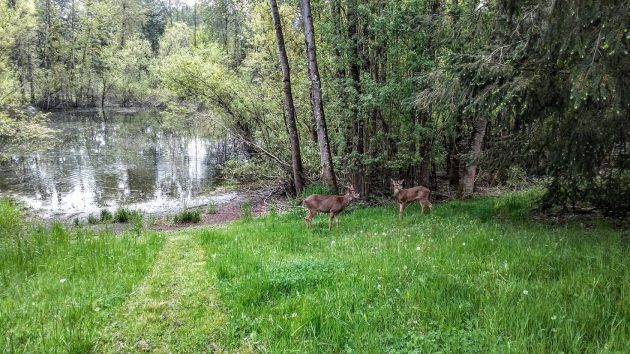 Deer are among the many kinds of wildlife that frequent this North Albany property the city wants to sell. (File photo from May 4, 2018)

Three years ago I got a look at a piece of wooded city-owned land in North Albany that included a meadow running down to a pond. The city is planning to sell the property, and the owner of a neighboring property has offered to buy and preserve it as a kind of private nature reserve.

The site of about 4 acres, off Ridders Lane north of Hickory Street, was excavated years ago to produce fill for the construction of the first phase of the North Pointe housing development. Then it was donated to the city.

There’s no public access to it, and the council authorized the parks department to sell the land in 2018, but nothing came of that until current Parks and Recreation Director Kim Lyddane brought it up again this year.

On July 14 the council will hold a public hearing on selling the property. There’s only one offer, from Lisa Thompson, who last year bought the house uphill from the site from Lee and Sue Cutsforth.

“My interest is to preserve the subject property in its current state,” Thompson wrote in her formal offer to buy it for $77,500.

The Cutsforths had planted fir seedlings around the formerly barren pit below their house and otherwise turned the landlocked city parcel into a haven for wildlife, displaced by all the development in that section of North Albany over the years.

According to Thompson, the place is a refuge for, among others, waterfowl, native and migratory birds, frogs, turtles and deer.

The Cutsforths took care of the city property below their house for years. Since they showed me around the place back in 2018, a 40-unit apartment complex has been completed just south of the property, on Hickory Street, and the owner of 15 acres to the west is working on plans for 195 condos and duplexes.

Sounds like the remaining wildlife will need a refuge more than ever before. ((hh)

Postscript: On July 14, the council voted 5-1 to accept the offer and sell the property with an added conservation easement. Councilwoman Bessie Johnson voted no. She argued that the lot was worth more even though it can’t be developed.