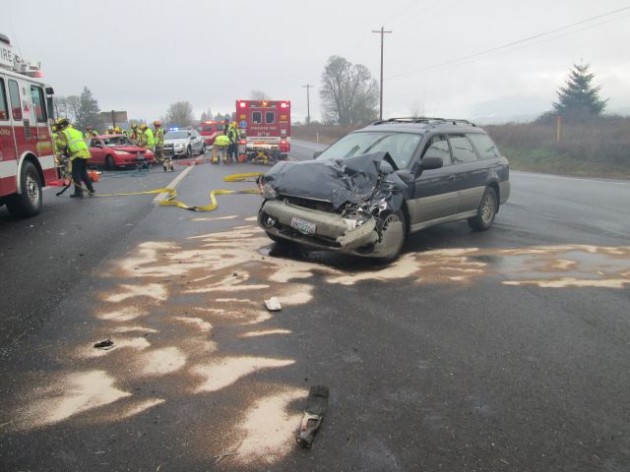 The Oregon State Police took this photo of the Dec. 3 crash site on Highway 20 at Independence Highway.

The left-turn collision on Highway 20 at Independence Highway on Tuesday (Dec. 3), in which one driver was cited for running the stop sign on Independence and was seriously injured, reminds everyone that there’s a problem. And ODOT knows it.

The state transportation department classifies the Highway 20 intersections at Independence and at Granger Road, three-quarters of a mile to the west, as among its top safety problems. A safety audit to see what might be done about the steady drumbeat of crashes at both sites made recommendations in April 2012.

Then, in March 2013, the ODOT traffic engineer for this region issued her response. Her main conclusion: Because of the traffic jams and rear-end collisions that would result on Highway 20, ODOT does not support and will not pursue putting in signals at either intersection. Also out, because of the cost estimated at upwards of $8 million, among other reasons, is a frontage road from one intersection to the other and a roundabout there.

What ODOT planned to try instead was restriping. At Independence, it planned to experiment with “two-stage left striping,” whatever that means. It might also install message boards at Independence and Granger. The  boards would warn Highway 20 drivers when side-street traffic is waiting.

Whether any of this would help, who knows. For the time being, prudent drivers take a different route and don’t try to make a left on Highway 20 from either of those roads. (hh)