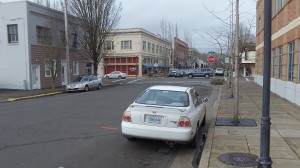 On Albany streets, panic about the federal “sequester” spending cuts is not yet apparent.

President Obama is going around the country talking about draconian spending cuts that will slow down the economy unless the Republicans in the House come around and quickly approve tax increases. You would think that as the chief executive, he would be more interested in trying to make the best of a law he had signed, even if he didn’t like it.

Instead, on Sunday the White House issued state-by-state forecasts of how this budget law would hurt each one. In Oregon, 3,000 civilian Department of Defense workers would have to take furloughs. We have 3,000 defense workers? In Oregon? Doesn’t seem likely, even if you count the civilians working for the Army Corps of Engineers. The White House said Oregon’s funding for “Army base operations” would be cut by $1.6 million. Which Army base? And that $1.6 million is what percentage of the total? The administration didn’t say, so the claim of grave budgetary damage is hard to believe.

The Obama people also outlined bad effects in public education, the environment, public safety, employment, child care and public health, among other things. All of it demonstrates that the feds have their hands in everything even though they can’t afford it. The government has to borrow nearly half of every dollar it spends. Considering that stark fact, cutbacks in government spending are very much overdue, and if the president can’t do it without hurting basic government functions in the states, he ought to resign. (hh)