Obama and his climate hubs 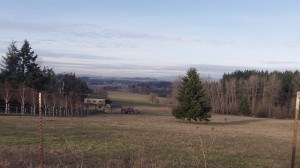 The Willamette Valley, where average annual temperatures have trended down slightly in recent years.

The federal government is doing something else to save us from climate change. The Washington Examiner’s headline: “Obama Administration Creates ‘Climate Hubs’ to Combat Extreme Weather.” Well, too bad they’re not in time to combat and perhaps repel what’s forecast for the Willamette Valley starting Thursday: another bout of snow and maybe ice.
Obama is trying to fulfill his pledge in the State of the Union speech to keep trying to slow down global warming, so-called. To this end, the administration plans to create seven regional “climate hubs,” one of them in Corvallis.

It’s a phony program to deal with a bogus problem. You can tell from the generalities used to describe it. The program will “help rural communities deal with climate change,” the Associated Press reported. The hubs will “serve as clearinghouses for information and outreach about extreme weather across the United States.” (Who needs a clearinghouse about extreme weather when we have Al Roker and all his colleagues, broadcast and cable, in the weather biz?)

The hubs will be based at existing facilities of the Agriculture Department so they can “help farmers and rural communities fight climate change and adapt to weather changes.” Further, the hubs will “assess local climate risks such as drought and wildfire and develop plans to deal with them, such as improved irrigation and techniques.”

You’d think that, first of all, farmers and rural communities have been dealing with weather changes as long as we’ve had farming. Also, what has the Agriculture Department been doing all these years, in cooperation with the Extension Service, if not trying to look out for the farm economy in changing conditions?

And if they’re not going to duplicate the work already being done, it’s not hard to imagine what these hubs will do instead: become centers for disseminating more of the nonsense about global warming and how we must strangle our economy in order to slow it down.

Everybody knows that the climate changes, sometimes slowly and sometimes relatively fast. In the Willamette Valley, tables compiled by NOAA show that average annual temperatures have trended downward ever so slightly — 0.3 degrees Fahrenheit — over the last 25 years, according to a member of an online community calling itself Global Warming Realists. Over the last 10 years, the trend has been down 1.5 degrees. And yet, somehow farmers and rural communities managed to get by without Obama’s new hubs. (hh)


3 responses to “Obama and his climate hubs”