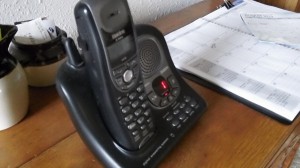 No one checks on this phone unless a foreign terror suspect has called it.

It’s hard for me to see how our liberty is endangered by the National Security Agency’s collecting of telephone and Internet records. Much of the complaining about this, it seems to me, is overly theatrical and even hypocritical.

The way the program has been explained, it does not sound like true surveillance to me. Nobody is watching my phone to make a list of the numbers I call. Instead, if intelligence agencies identify a suspected foreign terrorist, they check if that person has contacted anyone in this country, and if so, whom that contact has reached out to in turn. That seems to me to be a basic tactic, especially since we expect the government to try to prevent any 9/11-style plots against America from being carried out. I can’t see how this interferes with anybody’s privacy, let alone freedom.

Yes, I understand that the system may be misused by power-hungry government officials and crooked employees in a position to do so. But that is hardly new or confined to big electronic databases. We entrust all kinds of private information such as income and medical information to a faceless government bureaucracy — and even to many private ones — and as far as I know, abuses are very rare even though we have been doing this for decades.

Until and unless there’s an indication of widespread abuses, the NSA program is something over which only active terrorists and other criminals have to lose any sleep. (hh)

From Mary Grace, via Facebook: I so agree, Hasso.  I remember trying to tell my kids that if they were not doing anything wrong they had nothing to worry about.  Perhaps too much TV and or movies!  The Internet hasn’t helped either. Could this be not enough parent involvement???
From Marcy Eastham, via Facebook:  I’m more wary about what Facebook is telling their advertisers about me than what the NSA might learn about me! I agree with Mary. If you aren’t doing anything wrong what are you worrying about?
Patrick Lair, via Facebook.  I tend to feel the same lack of concern, but according to Snowden, intelligence gathering capabilities go far beyond what you describe. If what he says is true, private contractors have the ability to monitor anyone’s online activities as well as their email and phone conversations, “even the President.”
Marcy Eastham:  If one is to believe everything The Guardian is reporting (and it is relying strictly on Snowden’s information without corroboration is my guess) the NSA would have 40,000 employees monitoring all online communications of 313M Americans – plus the rest of the world.  I am a strong believer in the great powers of technology, but the math  just seems impossible so I can’t buy it.  Maybe I’m deluded, but I think that an organization of that size has a lot more important things to do than worry about me.
David Moore:  The NSA has been doing this kind of surveillance all along. Whether it’s legal, or whether it comes out in the major media has nothing to do with it.
Jim Clausen: C’mon, Hasso, take the blinders off for a minute…
We already have evidence that the government is using stored database information against American citizens. The IRS ADMITS having targeted conservative pundits – such as the Tea Party, AFP, Freedom Works, and a whole host of other conservative groups. How did the IRS target them? They told us – flat out – they culled the information from their database searching for words such as “Tea party,” “conservative,” etc, etc. They then used that information to withhold quantifiably legitimate tax exempt groups from garnering tax relief with an exempt status.
Yeah, they scan phone numbers and look for links to terrorism. But let’s also look at what the government has said about “terrorists.” Janet Napolitano has labeled (on many separate occasions) conservatives and conservative groups as terrorists. Are they going to be targeting these supposed terrorists watching for “links”? Who’s on their “enemy list”? Is this the list where Obama promised to “punish his enemies”?
They have a 3-step connection set up at this point. That means they consider information shared with not only second parties, but with third parties. If Joe Blow (who they consider a possible terrorist) has a connection with John Smith, and John Smith emails Hasso Hering, then Hasso Hering (as well as anyone else John Smith contacts) also goes on the list — a 3 step connection. With a 3 step process, numerically, they can cover a HUGE section of society “legitimately.” And this is how they have it set up NOW…
To say, “If you haven’t done anything wrong” is naive at best and is the same attitude that has gotten many, many people in trouble, often costly trouble in lawyers’ fees and court expenses proving themselves innocent. I myself know a few who did absolutely nothing wrong and have been snared with this kind of trouble!
And, to those who look at Obama and say, “Well, I trust him”: What if it were George Bush with this power? Would the answer still be “Okey dokey”?
Mary Grace: The unspoken key phase here is, “release of information.”  An example of this is, I am an old lady and well remember the condition of our young men ad women coming home from WWII, Korea and Nam…it was because of the things they saw and participated in…war is horrid to say the least and unless you have been in battle, you know nothing of it.  At one time, wiser men than us knew the general public would not understand and much was kept from us…we were told about the heroes and the glory, the rest was left to history.  Now news media personnel and cameras are on the front lines and while we would like to think that only the enemy is the only one wrong and making mistakes, we are finding out that even we are guilty of wrong doing in what we feel is in the best interest of the majority.  Our very liberty and freedom rests on the enemy not knowing what we know…the possibility of that is becoming increasingly difficult because the general public demands to know things that threaten that very liberty and freedom we seek.  Oh that we would find the secret of peace and run with it.
Posted in: Commentary
Tags: NSA, surveillance, terrorism