Now that the ‘hazard trees’ are gone … 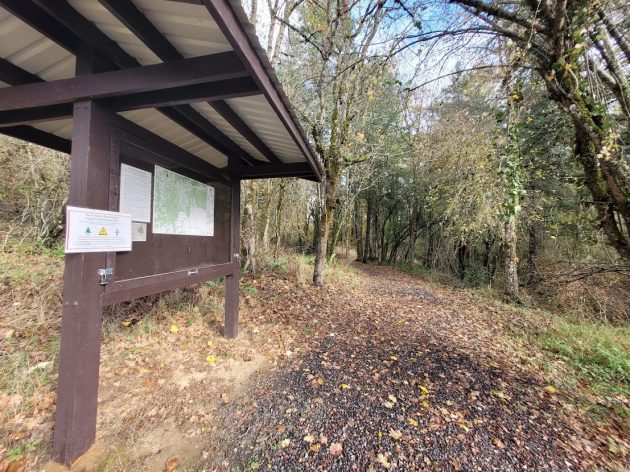 Signs and a map mark the eastern entrance of the North Albany Natural Area.

Last month Benton County had a lot of Douglas firs removed from the natural area at the corner of Crocker Lane and Valley View Drive in North Albany.  So let’s do a quick check and see what the place looks like now.

I stopped there around mid-day Sunday, and here’s the result:

You recall that this wooded area of roughly 10 acres had originally been destined to be covered with streets and houses. But Myles Breadner, the developer of the nearby subdivision, agreed to donate the property to Benton County as part of  a deal on street improvements along Crocker.

Now the area is administered as part of nearby North Albany County Park.

The county says some of the Douglas firs in this stand were ailing or dead and needed to come out lest they eventually fall and hurt someone. They expect to have to go in there every few years to do the same thing again.

But they’re replanting the area with another conifer, a valley pine better suited to the changed climate in the Willamette Valley.

As you can see, the area’s footpaths have been reopened to public use since the logging operation was completed.

Since there’s no adjacent off-street parking, the footpath evidently is intended mainly for people living nearby. Still, if you’re curious what this “natural area” is like, go and check it out. (hh)