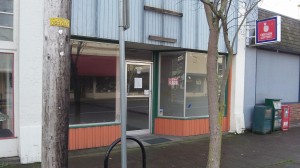 The restaurant plans to relocate here.

Here’s an Albany news flash: Novak’s, the Hungarian restaurant that’s become famous up and down the state over the last three decades, hopes to remodel a historic storefront downtown and move there in time to reopen in the new place next June. This was announced Friday when the city of Albany made public the agenda for the Wednesday meeting of the Central Albany Revitalization Area (CARA) advisory board.
The restaurant hopes to buy the historic Broder’s meat market, later a dairy store and most recently a T-shirt shop, now closed, at 208 West Second Ave.
The family-owned restaurant started in 1984 on Santiam Highway and later moved to a building in the Heritage Plaza shopping center south of Southeast 14th Avenue. Restoring the downtown building would cost an estimated $627,000, and the restaurant is asking the downtown urban renewal agency for a loan of $126,000.

The application says the restaurant has been struggling with higher costs of doing business, including building repairs, and therefore wants “to return to our roots and open a smaller, more intimate restaurant. … We are striving for authenticity both in our menu and in our building, and as our funding is limited we truly need CARA assistance to complete the project.”
The CARA advisory board meets at 5:15 p.m. Wednesday, Nov. 20, in the council chambers at City Hall. (hh)

This item has been updated with a photo of the prospective restaurant location on Second Avenue and the fact that it’s the location of a former T-shirt shop. (hh)