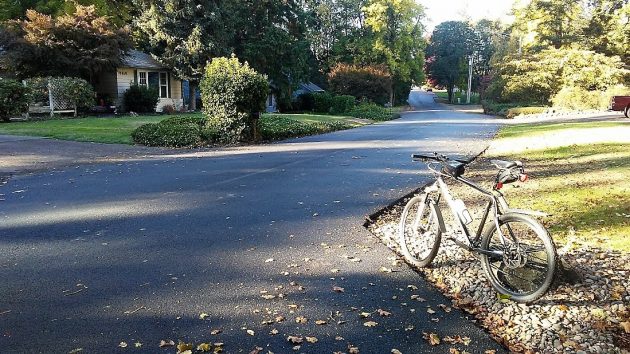 Looking north on Park Terrace on Oct. 14, when the weather was still sunny and dry.

Getting streets maintained and pavement repaired is always an issue in Albany, but not any more on two streets in a leafy neighborhood at the southwest edge of town.

On a bike ride the other day, I noticed that on Lakewood Drive and Park Terrace, for a distance of three-quarters of a mile, the surface had been refreshed with a brand new coat of blacktop. How come, I wondered. And why these streets, when so many in the older parts of town are falling apart without anything happening to fix them?

The answer, it developed, is that Lakewood and Park Terrace, despite having been inside the city limits for decades, are still mostly county roads. The County Road Department considered the pavement to be getting bad and did something about it.

“Both roads have not had a maintenance treatment of any kind since I’ve been employed by Linn County,” Roadmaster Darrin Lane, who was hired in 1995, told me by email. On a scale of zero to 100, the surface was rated less than 20, which meant close to complete failure.

But the substructure was still in decent shape, so after some grinding and a leveling course, a contractor, North Santiam Paving, put on a two-inch layer of asphalt. The cost was $95,922, and of that the city of Albany paid $31,112.

“We felt strongly that we needed to address the pavement surface in this area this year, but we were not in a position to develop a full-blown reconstruction project,” Lane wrote. “Thankfully we were able to partner with the City of Albany and give the area residents an improvement that was cost-effective and should last until a long-term plan to address public infrastructure needs in this area is completed.”

You’ll notice there are no curbs or gutters, and you’ll also see that they’re not needed on these streets. (hh)