Not your usual flotsam and jetsam 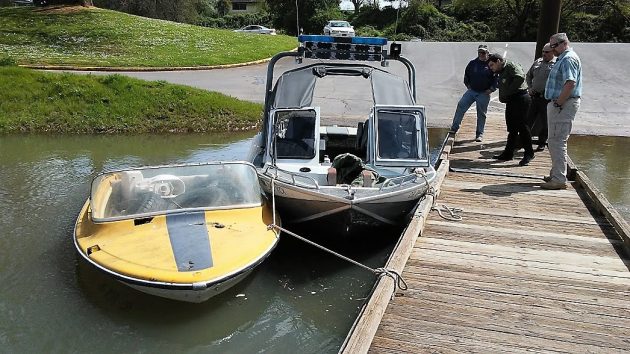 Sheriff’s Sgt. Ryan Moody, second from right, and others look at what Moody had towed to Bowman Park Wednesday.

The riverfront is my beat, and Wednesday it offered an unusual sight: The hull of a derelict speedboat loaded with a collection of old tires and a toilet complete with its tank.

The wreck with its cargo was tied up at the Bowman Park dock, waiting for a tow truck to come and haul it away.

Sgt. Ryan Moody, with the patrol division of the Benton County Sheriff’s Office, told me someone had called the department Monday and reported that a boat was caught in the bushes on the bank near the Albany railroad bridge. No one was in or near the boat, so there was no hurry, and the staffing situation at the time prevented an immediate response.

On Wednesday, Moody took out the sheriff’s river patrol boat, found the wreckage and towed it downstream to Bowman.

There was no indication how long this water-logged wreck had been adrift in the river or stuck on the bank, or where it had come from, let alone to whom it had belonged. The hull still bore a state registration number, so it may be possible for the sheriff’s office to track down the most recent owner.

The circumstances are veiled in mystery, of course, but what it looks like is this: Somebody had some unwieldy trash to get rid of. Instead of arranging for proper disposal, he piled the tires and the toilet in some leaky and motorless craft that was lying around the place and pushed the whole mess into the Willamette.

Maybe, if they can track the person down, they can send him the bill for towing the hull and its cargo to the dump. (hh)


9 responses to “Not your usual flotsam and jetsam”