“Not afraid”? Easy for us to say 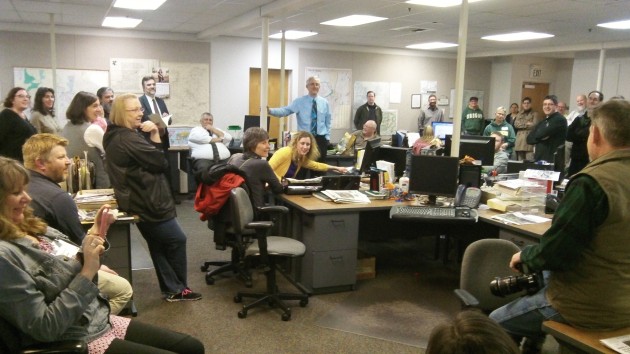 Before this festive part of Wednesday’s retirement party at the Democrat-Herald, the staff and guests observed a minute of silence in tribute to the Paris victims.

A terror attack like the one against the editorial staff of the French weekly Charlie Hebdo — could it happen in the United States, or even in Oregon? It could happen if some publication became a target of a band of radical Islamists or jihadis. But it’s not likely.

There is no publication I know of in Oregon that would go out of its way, as the Paris periodical repeatedly did, to poke fun at the expense of the Muslim prophet with cartoons or in any other way.

Our publications occasionally do publish editorial cartoons in which Christian symbols or concepts play a part. Every time a celebrity dies, for example, the deceased meets Saint Peter on the next day’s editorial pages, and sometimes God’s voice, if not his image, is part of the cartoon. But there is no risk in that. One or two readers might complain, but that’s about it. Churches are not about to issue fatwas — orders to kill on sight — which is what Ayatollah Khomeini did against author Salman Rushdie in 1989.

Violent attacks against American newspapers are not unheard of. In 1910, a bomb killed 29 employees of the Los Angeles Times and injured about 100 others. Less dramatically, western lore is full of editors who offended someone and thus faced the risk or reality of being horsewhipped or shot. But it hasn’t happened in modern times, as far as I can recall.

Some Oregon papers have rudimentary security setups such as locked doors and visitor passes, mostly started after 9/11/2001. (I was reminded of this Wednesday. Before we were admitted at the Albany Democrat-Herald, guests showing up for Graham Kislingbury’s retirement party had to sign in and be issued visitors’ labels that said they expired on 1/7/2015, lest we use them later to gain unauthorized access.) But such measures are no defense against a determined intruder, let alone more than one. Most companies also have a rule against weapons on the premises. If the rule is obeyed, the employees are pretty much sitting ducks in any armed attack, even one far more amateurish than the precise operation of those heavily armed attackers in Paris.

In France and elsewhere, the Paris murders prompted brave words such as “Not afraid.” That’s easy to say. But I didn’t see any news story in print or on TV that actually showed the material for which those masked killers made Charlie Hebdo’s staffers pay with their lives. (hh)


One response to ““Not afraid”? Easy for us to say”