Not a pleasant sight, this site 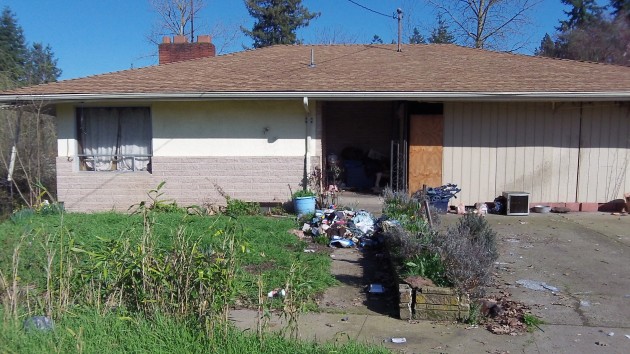 This property near the Albany riverfront came up before the city council on Monday because the city is trying to do something about all the junk and trash. The place is at the north end of Denver Street overlooking Bowman Park, and it shows how complicated it is for the city to deal with situations like this.

According to what the council was told by the city staff, the owner lives elsewhere and the place has been used as a flop house by various people. The police have been called to the address many times. The council saw pictures of all kinds of trash in the back yard. All I saw when I went by there on the bike later in the week was what you see in the photo, taken from the street.

There’s talk of the owner donating the property to the city. This would allow the city to keep people out as trespassers and clean the place up and sell it. But an outstanding bank loan is involved.

From the looks of the place from the outside, it seems hard to believe that the Linn County assessor assigns the place an assessed value of $254,830, which translates to an annual property tax bill of more than $4,500. It’s a pretty nice location, which might account for part of this assessment, but various online real estate sites report that the property was last sold in 2002 for $45,800.

In any case, you have to hope something can be worked out so the neighbors don’t have to look at this mess much longer. (hh)


One response to “Not a pleasant sight, this site”