Not a little park, but a parklet 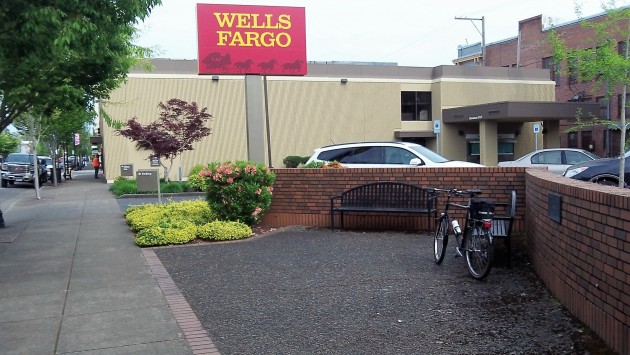 Meant for resting, not parking bikes, this space is about to undergo a change.

Thirty-six years ago the First Interstate Bank in Albany furnished this wide spot in the sidewalk in front of its parking lot on First Avenue in case any downtown pedestrian wanted to pause and take a load off. Now, with the consent of Wells Fargo, the Albany Downtown Association plans to turn the space into a “parklet.”

The design for the redecorated space calls for more places to sit, chunks of sawn-off tree trunks placed like coffee tables, game boards for checkers, and even a couple of tall cedars in pots. The idea is to make it a pleasant spot to sit when the weather is fine, maybe read or chat with a friend, and yes, even challenge someone to a game if they have the time. In the fall, the furnishings will be removed. 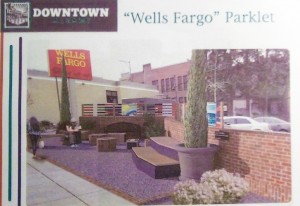 A rendering of the redesign as envisioned by architect Christina Larson.

Peggy Burris, the executive director of the downtown association, sees parklets as another way to make downtown interesting and attractive to visitors and residents alike. 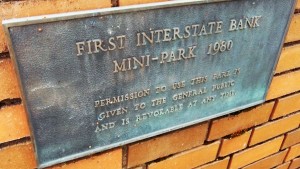 A plaque on the wall reminds us of a former bank and its good intentions.

Parklets plural? Yes, after creating the one on First this summer, hopefully by June, the association hopes to have a second one next year on part of what used to be called the Broadalbin Promenade, now officially the Broadalbin sidewalk extension. That would be near the outdoor eating area of the Vault 244 restaurant.

The association is paying for the parklets out of its budget, an estimated $4,000 for the Wells Fargo space and perhaps $6,000 for the Broadalbin job in 2017. In both cases, the additions to the available space were designed by architect Christina Larson, whose firm, Varitone Architecture, has its office downtown. Last week, Burris and Larson pitched their idea to the board of CARA, the downtown urban renewal area. They didn’t want or ask for money. What they wanted instead, and got, was the board’s encouragement to go ahead. (hh)

10 responses to “Not a little park, but a parklet”