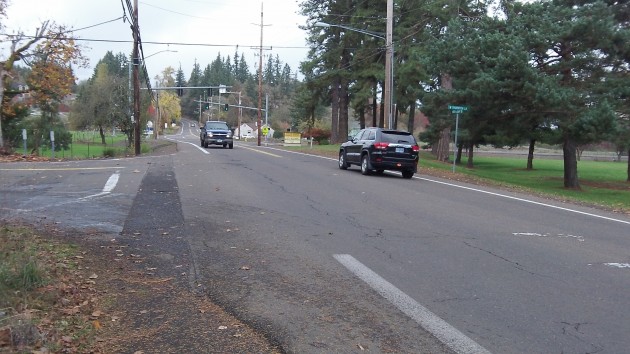 This section of North Albany Road is due for reconstruction. The intersection is to be moved to the signal in the background.

Engineers and builders have been constructing roads for centuries. But now the process has become so complicated that road projects are facing long delays and higher costs. Take just one local example, the long-planned reconstruction of a section of North Albany Road, the busy link to a fast-growing part of the city of Albany.

The reconstruction of this road had been in the budget for 2012-13. But then, various complications arose.

A study commissioned by the city found a new floodway in North Albany. Raising the road to within a foot of the level of a massive 100-year flood would require more work to make sure the water could still get through. This meant that a bridge across Thornton Lake probably could not be modified and reused, as originally planned. Wetlands and other permits from state and federal authorities have yet to be obtained, and estimated costs have risen to $4.3 million, more than the city has set aside for this work.

The latest plan was to rebuild the road in 2014, but the city engineer told the city council in a memo Monday that based on remaining design and permitting requirements, “it is unlikely that a schedule for construction in 2014 can be met.” Meanwhile, new houses keep going up in North Albany. Dealing with the traffic issues this creates is taking far too long. (hh)

Tom Cordier:  Please explain the real benefit of moving Thornton Lake Road to intersect with the light at NAMS road.
Currently the light is green for N/S traffic unless the e-eye sees a vehicle trying to enter N/A Rd from the school road. When vehicles enter to turn right there is no need for the signal. If the proposed new intersection is constructed, then we’ll be subjected to a full red-light regardless of school being in session or traffic conditions.  Moving the intersection will be a waste of taxpayer money and I don’t care how long it has been planned. And I don’t care if we got a grant to do it ’cause there is no free money. I travel that road more that once daily. These planned constructions are proposed by staff and the council goes along-to-get-along. STOP THE WASTEFUL SPENDING.

Here’s an update: At Monday’s work session, the city council urged City Engineer Jeff Blaine and his colleagues to push ahead with planning work for the North Albany Road project. Councilman Floyd Collins called the project a “critical element” and said he wants the city to complete it “as fast we can.” The council agreed with a staff recommendation to stick with plans to raise the road so that even in a very bad flood, emergency services could use this main link between Albany and its North Albany district. (The road was under water in the flood of 1964 but remained above it in the most recent flooding in 1996, the council was told.) Blaine said he’d be back before the council once he has a better idea of when it can be done and how much it may cost. (hh)