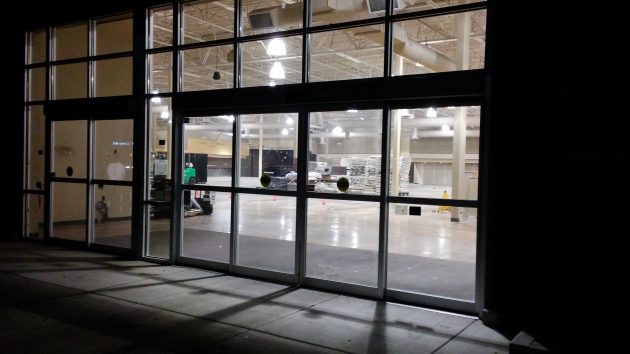 The lights were on in the still empty NA Village store the evening of Dec. 30.

The new supermarket and hardware store planned for North Albany Village will open this spring, perhaps as early as May 1. That’s the hope of Tyler Myers, president of The Myers Group, who called me from Seattle Thursday to confirm the plans for what will be his company’s first store in Oregon.

He couldn’t be sure about the timing because he’s just starting the city permitting and didn’t know how long this would take in Albany. “We’re going to move as quickly as we can,” he said.

I missed Myers’ call because, on an afternoon bike ride and bundled up against the cold, I could not fumble my phone free quickly enough. When I called him back, I forgot to ask him what he planned to call the Albany store. But I learned some other things, among them:

The grocery will be a full-service supermarket with all the usual departments — meat, produce, dairy and so forth — plus a deli, food service and a seating area.

Because the space formerly occupied by Ray’s Food Store, which closed in December 2013, is a bit large for the market area it serves, the Myers operation will have an Ace hardware store in addition to a 30,000-square-foot supermarket. For the hardware section, the plan calls for building an addition to house a garden center.

Myers said someone told him a pharmacist was interested in opening a pharmacy, and he looks forward to talking to that person. He’s also planning on a bank branch, though he’s aware that Oregon State Credit Union, which operated in the former Ray’s, has since opened a stand-alone branch across the parking lot.

He expects the store to have about 50 employees.

The nearest similar store in The Myers Group, on Camano Island in Puget Sound, serves a community of twelve to thirteen thousand people. Another outlet of similar style is in Juneau, Alaska. North Albany alone has an estimated 9,000 people. (In the November general election, Benton County counted ballots from 6,060 registered voters in the city portion and the North Albany fire district.)

Myers does not see the Willamette River as a boundary of the service area of the North Albany market, “We’re hoping to serve residents of the downtown area and nearby areas as well,” he told me.

The company has been in business since 1978, and it strives to tailor its stores to what local customers want. “We will be speaking to the community,” Myers said. By that he meant gathering information in various ways including surveys and focus groups. He’s confident this approach will contribute to the North Albany store being in business for the long term. (hh)

Postscript: The original story said “next spring,” but since we’re now in 2017, I should have said “this spring,” which is what it says now. (hh)