No worries: Not an “oil car” 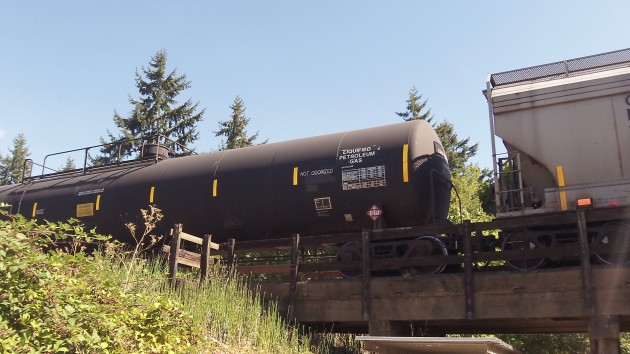 With news photos of controversial oil trains on my mind, I took a closer look at this tank car. It was part of a batch of rail cars the Portland & Western was shifting back and forth at its Millersburg yard on Tuesday afternoon. And no, it was not an oil car at all. Instead, being shunted high above the Cox Creek Trail, it was marked to carry liquid petroleum gas — otherwise known as propane.

Oil trains running through Oregon have met with protests because of safety concerns in case of derailment — one disastrous wreck killed 47 people and leveled part of a town in Quebec in 2013 — and because some people just want to stop the use of fossil fuels. The federal government requires railroads to notify state fire marshals of oil trains carrying more than 1 million gallons of crude from North Dakota, and so far none of those long trains are passing through the Willamette Valley. (Even if they did, they would not be seen on this part of the Portland & Western shortline, which operates the Millersburg yard.)

So, what about liquid petroleum gas or propane? It’s a fossil fuel too, being produced at either oil refineries or natural-gas process plants. But for some reason it has escaped the ire of the global warming fanatics. The Port of Portland just announced plans by a private company to build a huge propane terminal. Not only did nobody protest, but the Portland mayor actually hailed it as a great economic benefit.

A few months ago the Benton County Sheriff’s Office announced it was converting its patrol cars so they could run on propane as well as gasoline. One reason: Lower emissions when running on propane.

Many of us are familiar with propane as the fuel that burns in our backyard grills. It is stored as liquid in those high-pressure steel containers and comes out as a flammable gas when we open the valve. (Or not, but that means the tank is dry and you forgot to have it refilled.)

How dangerous is propane? Evidently a lot less so than crude oil in a long train that is parked on a grade and allowed to come loose overnight and careen toward a little town below, which is what happened in Quebec. In 2001, the propane industry published a comparison of risk. The chance of dying in a propane explosion came out as about the same as being killed on the ground by a falling airplane: One death a year, on average, per every 37 million people.

As if the labels on this tank car were not enough, there was also the placard. It said 1075. On cars carrying crude, the placard says 1267. In short, I had no worries at all, at least none connected to fossil fuels or trains, as I got back on my bike and passed right under that car. (hh)