No show so far at new swift roost – Hasso Hering

No show so far at new swift roost 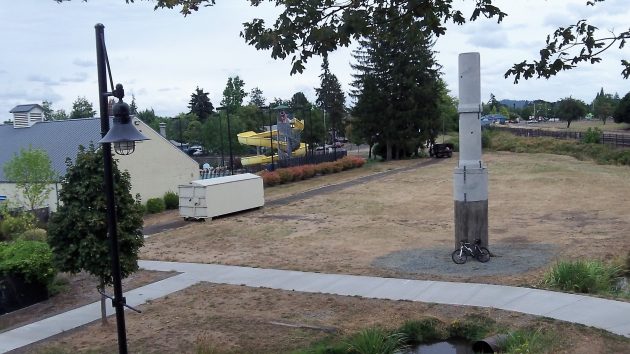 The newly built 30-foot swift roost near the pool in Swanson Park on Thursday afternoon.

Well, Thursday night was a bust as far as swifts were concerned. The Audubon Society of Corvallis and associated bird groups announced an “Albany Swift Tower Monitoring” for Thursday evening. No swifts swooped in to test their new roost. And nobody else showed up to see them not doing so.

For more than 30 years I worked across Lyon Street from Albany Fire Station 11. Not once did I see or hear about swifts, those speedy swallow-like fliers, swarming the fire station on their spring or fall migrations to roost in the station’s chimney. But evidently they did just that, for when the old station was demolished this summer, efforts were made to provide a similar pipe as a roost, albeit three blocks away on the undeveloped back side of Swanson Park.

The 30-foot stack was formed with sections of concrete pipe held together by steel straps. The Audubon Society summarized the effort as “a collaborative partnership initiated by the Albany Fire Department, Audubon chapters in Oregon and Washington, plus the Vaux’s Happening Project under the auspices of National Audubon.”  Stability Engineering of Corvallis donated its service, Albany Community Development Department expedited permitting, Albany Parks and Recreation provided the location, and Public Works did the excavation and backfilling, according to the society. Advantage Precast of Salem supplied the tower sections, and Forslund Crane did the heavy lifting for the assembly.

Audubon calls this tower the first of its kind on the West Coast. And as for helping the birds find it on their migrations from North to South America in the fall and back in the spring? There was talk of “swift guano” being placed inside. (Just what a little bird wants as place to rest its weary wings — a concrete wall pooped on by somebody else.)

So what about those swifts? Are they going to find this place and use it? Parks Director Ed Hodney says they haven’t so far. The Audubon people say they’ll be watching each evening this month, from just before to just after sunset. You can join them if you want. But be prepared for disappointment if the birds don’t show. (hh)

3 responses to “No show so far at new swift roost”