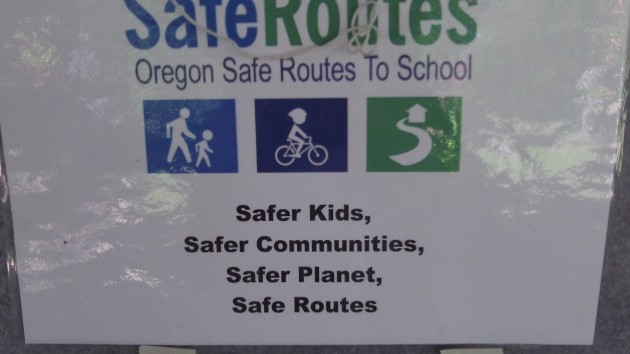 A poster at the Sunday event.

Yesterday I wrote about Sunday’s Albany Bike Ride for Kids for which no kids showed up. It was for children who had taken a bike safety course during the just-concluded school year and were invited to take part, and I speculated about why they stayed away. A reader wondered about those alleged invitations, because she had not seen one even though her child had taken the course. Good question, and there is an answer.

I asked Steve Pensinger, chairman of the Albany Bicycle and Pedestrian Advisory Commission, which organized this event, about how people were invited. He e-mailed back:

“I think the breakdown came with the passing of a communication flyer that went from me, to the school district office, to each secretary at all elementary schools, to the teacher (who would need to print them off), to the student (who would need to take the flyer home), to the parent. And this at a time when everyone at the schools is busy wrapping things up and sending other information home to parents.

“We certainly will evaluate this. My initial thought for next year, if we decide to give it another try, is to physically go out to each classroom with flyers in hand and promote the ride and try to get the kids excited about it. The secretary at Liberty told me that she now has the ability to send this kind of info directly home, so that could be another way to get the word out.”

So it may not have been — as I speculated — that freshly minted sixth-graders had no interest in showing off their cycling skills on a Sunday afternoon. Instead, it may well have been the case that those who would have had an interest didn’t get the word.(hh)


One response to “No-show bike kids: An explanation”