No respect for ‘Beavers’ rail car 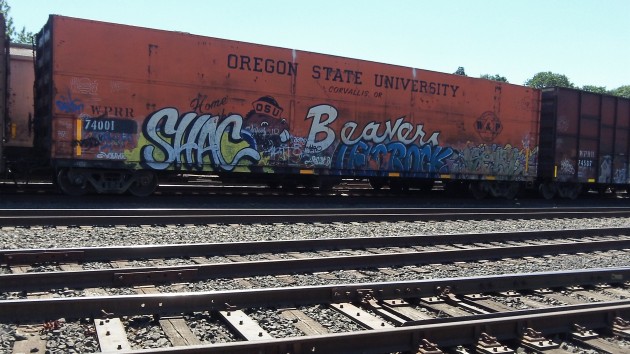 Graffiti artists — let’s call them vandals instead, for that’s what they are — attack everything they can reach. And that evidently includes the boxcar the Portland and Western Railroad had painted in honor of Oregon State University.

It had been some time, maybe a year or so, since I last saw this car. Then it was clean, as far as I remember. But when I spotted it again Monday in the Millersburg yard, it had undergone a big change in appearance,

Defacing railroad cars is nothing new, as everybody knows who has waited at a crossing and watched a passing freight. What I don’t understand is why, if the vandals want people to get some message, they don’t try to make their messages more instantly understandable. Experts in typography I guess they are not.

Some of the spraypaint creations are elaborate, like these on the Beaver car, and must take quite some time to complete. So one mystery is why no one sees it being done and calls the cops or otherwise interferes. Maybe because it’s done at 3 or 4 in the morning. But everywhere else there are security cameras now, so why not in rail yards?

I’m not sure of this, but it seems that the railroad still called itself the Willamette & Pacific when it started naming some of its locomotives after towns on its short-line system and also had a couple of boxcars painted with university colors and logos, this one for OSU and another for the U of O. I’m wondering whether the Ducks car has been similarly defaced. (hh) 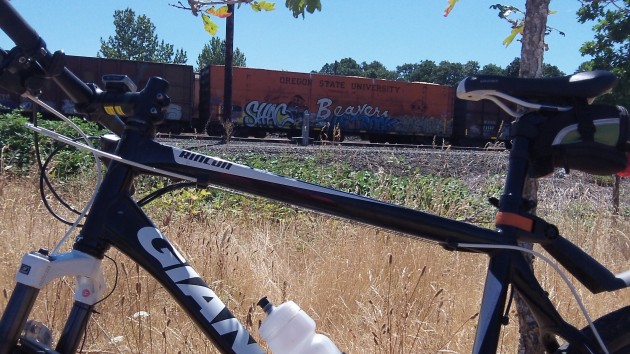 I was touring the Talking Water Gardens when I spotted the Beavers car in the Millersburg yard.


3 responses to “No respect for ‘Beavers’ rail car”