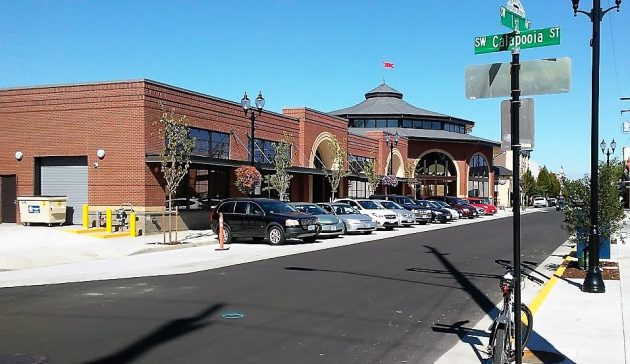 Parking spaces in front of the Albany Carousel. Off-street parking was not required.

Now that parking for the Albany Carousel has become an issue, people keep asking why off-street parking was not provided when this attraction was built. The answer is that it was not required by the city’s rules.

The planning staff at City Hall approved a site plan for the carousel on May 2, 2016. The staff report for the approval notes that section 9.020 (6) of the Albany Development Code exempts new buildings within the city’s Downtown Parking Assessment District from the off-street parking requirements elsewhere in the code.

And as a result, the staff report notes, “No off-street parking will be constructed.” If anybody worried about how that might work out with a facility that hoped to attract thousands of visitors, the report does not mention it.

The report pointed out that as part of the carousel construction, nine parallel parking spaces on the north side of First Avenue would be replaced by 13 back-in angled spaces, and that was done.

A map appended to the site review staff report shows the parking assessment district extending from Calapooia Street in the west to Railroad Street in the east, and from the Willamette River south to Fifth Avenue. (How the district originated and how it operates are opaque to me at the moment. It’s not the same as the parking enforcement district described in the Municipal Code and administered under contract by the Albany Downtown Association.)

In any case, if parking in connection with the carousel now becomes a problem, it’s not because nobody thought of it before. It’s because the development code practically says that parking downtown should be on the streets. (hh)