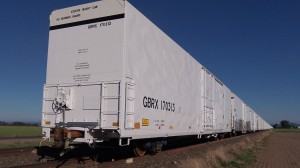 As you might expect, the unexplained presence of a long line of brand new refrigerated railroad cars on a siding southeast of Albany has prompted rumors and a few jokes on the Internet, that fertile field for fueling phony theories of plots.

I reported on sighting these cars on Sept. 19 after riding along Midway Road, which parallels the track, and counting 62 of them, all brilliant white and all but two or three untagged by graffiti.

Their markings showed the cars were built by Greenbrier, the Lake Oswego-based builder of rail cars and provider of railroad management services. They were sitting on a siding of the Lebanon-based Albany & Eastern Railroad. I could not be sure at the time but thought the cars were stored there until they were delivered to their users.

After seeing a questioning Facebook entry on the situation, I reached the A&E on Monday. Yes, the cars are being stored there for the manufacturer until they are put in service, and the railroad expects them to be gone within the month.

Sorry, no United Nations plot. No mystery at all. (hh)