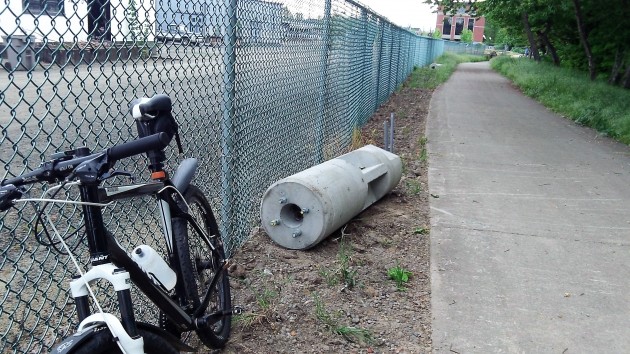 Those mysterious chunks of concrete lying along the Dave Clark Path on Albany’s riverfront are no mystery at all when you remember that a contractor is working to install lighting all along the trail.

These are the bases or pedestals on which the 16-foot lighting poles will be mounted. They have helpful labels, too, telling the curious passer-by that they are made by a company in Wilsonville and weigh almost 1,400 pounds each. 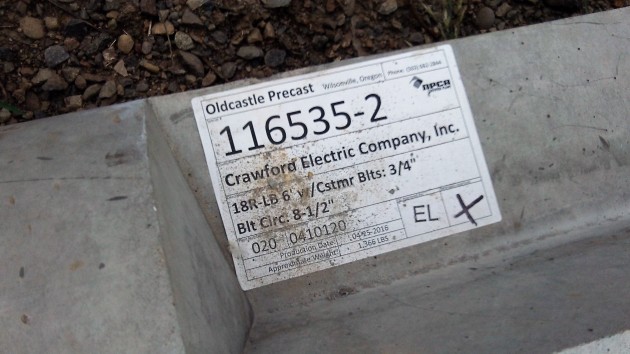 The lighting contract calls for 80 posts, topped by LED fixtures, between 70 and 100 feet apart along the trail from Monteith Riverpark on the west to its eastern end. (From the park at Calapooia Street to the end on Front Avenue, that’s 1.2 miles, according to my bike computer.)

Signs on the path explaining the lighting project say it’s to be completed by June 1, but the city told me in March they expected it to be done by the end of June, which seems like a more realistic timeline considering the status of the work. Underground electric wiring was installed beginning at the end of March.

Crawford Electric of Stayton has the $298,008 contract to install the lights, funded as an urban renewal project by the Central Albany Revitalization Area.

You may have seen several stories on the Dave Clark Path lights on hh-today.com. Why all the attention? Because you report what you see, and my bike and I find ourselves on that path several times a week. (hh)