No longer puzzled by the height of stumps 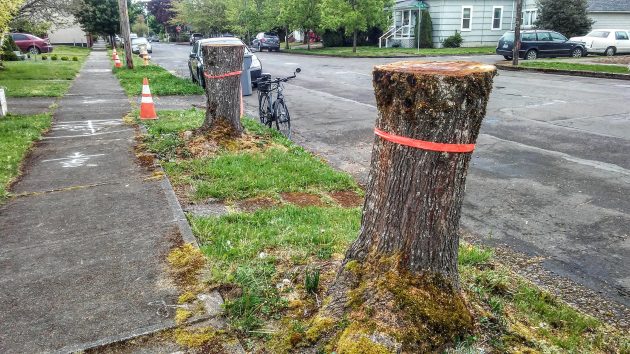 Chest-high stumps on NInth Avenue on May 1, after the tree cutters were through.

So why, the Question Man wanted to know, did they leave chest-high stumps when a crew felled roughly 20 street trees on Albany’s Ninth Avenue in April? Why not saw the trunks off near the ground?

Because, the Answer Man replied, because leaving a good chunk of the trunks makes for easier removal of the stumps later in, when the Ninth Avenue reconstruction takes place.

The answer guys in this case were Rick Barnett of the Albany Parks Department, who besides supervising park maintenance doubles as the city forester, and Chris Cerklewski in Public Works Engineering.

Barnett wasn’t sure but said, “My best guess is that it allows them to easily pick out where the trees are, gives them something to grab onto with an excavator if they can pull the stumps out, and is easily remedied with a chainsaw if they need to grind stumps. Chris probably has a better answer.”

And Cerklewski added: “Yes, that is correct.  It’s done that way to make things easier for the contractor to remove the stumps.”

The reconstruction of Ninth Avenue between Broadway Street and Elm Start is getting under way this spring, K&E Excavating of Salem has the contract, worth just under $1.4 million. By Nov. 15, the contract calls for the planting of roughly 30 new trees. (hh)


3 responses to “No longer puzzled by the height of stumps”