No longer neglected: House rescue is under way 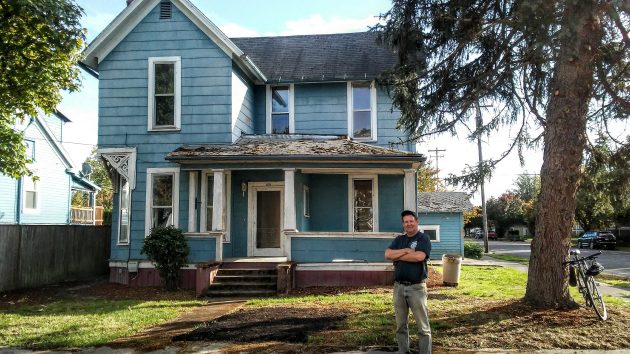 Greg Schneider stands outside the house at 732 Fourth Ave. S.W. he has begun to repair and renovate.

After standing empty and neglected for years, an old house in Albany’s Monteith Historic District now has new owners who have cleaned it out and are fixing it up. They hope that it will once again become a family’s home.

The house, at 732 Fourth Ave. S.W., dates from around 1880, when it was built in what the city’s historic inventory calls the western farmhouse style. In recent years it was owned by the Federal National Mortgage Association and became overgrown to the point where the city ordered a cleanup and eventually threatened to foreclose on it for unpaid liens. This year the city settled with Fannie Mae for a lesser lien amount, and the property was cleared for sale.

Greg Schneider and his wife, Wendy Greenwald, bought it. Retired, they raise alpacas and now a few sheep on their farm on Rodgers Mountain Loop near Scio.

Their purchase of the Albany house closed on Aug. 30, and work started forthwith. One of the first things was to rebuild the top of the brick chimney, which had fallen off.  Also, the big old tree in front was cut down to open a view of the two-story structure’s interesting lines.

On Tuesday afternoon I got off the bike when I saw someone working in the yard. It was Greg, who stopped what he was doing and gave me a tour of the inside. It’s a solid place, with four bedrooms, two and a half baths, and a full basement with a concrete floor.

Schneider figures on putting on a new roof, repairing the windows, raising part of the building to make it level, putting in new ceilings, and replacing the plumbing, along with all kinds of other renovations.

He has experience renovating houses, and he expects to get this job done. But it will take a little time, and he hopes the neighbors will be patient.

He won’t have any trouble on that score. Looking at the place now, compared to a few months ago, it’s already obvious that the owners care and the house is in good hands. (hh) 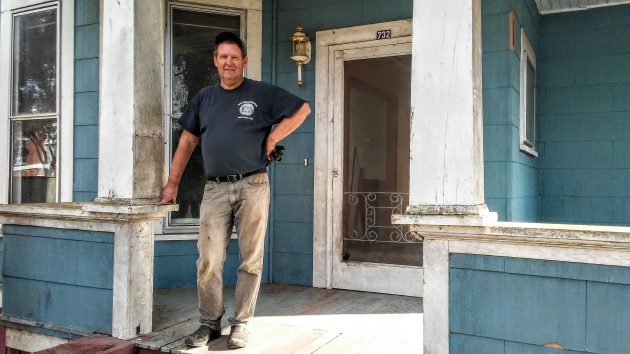 Greg Schneider on the porch. The interior has been cleaned out so the renovation can begin.


11 responses to “No longer neglected: House rescue is under way”