No hope: One senator per county 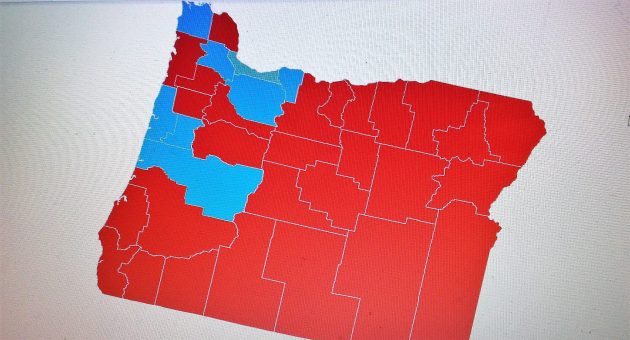 Oregon counties and their votes for president last November.

Oregon is not about to change its constitution to resemble the federal system of allocating delegates to the state legislature. But the map above shows why in the red counties, including Linn, sentiment for doing so keeps popping up.

Two Republican representatives, Carl Wilson of Grants Pass and Gene Whisnant of Sunriver, introduced House Joint Resolution 6. Two others, Bill Post from Keizer and Greg Smith from Heppner, signed on later. Their bill calls for the state Senate to be increased from 30 to 36 members, and for one senator each to be elected from every one of our 36 counties.

The bill would be put to the voters as a constitutional amendment, but only if hell froze over and the legislature approved. The House Rules Committee held a hearing on the bill on Feb. 21, as a courtesy to the sponsors. Even before it was written the bill was dead.

There are two problems. One is the map above. The red counties are where Trump was favored for president. If state senators were elected by counties, the Senate would have, probably, 28 Republicans and six Democrats. The big Democratic majority in the Senate now would never allow this to become a possibility by favoring this change.

An even bigger obstacle is Reynolds v. Sims. In that sweeping Supreme Court opinion of 1964, Chief Justice Earl Warren struck down all state voting systems not based on population on the grounds that they violate the Equal Protection Clause of the 14th Amendment. States still had some leeway to follow political or other boundaries in their legislative districts. They could even try multi-member districts. But not if any of these things resulted in substantial differences in the weight of any single vote.

What about the federal system, where even tiny states have two votes in the Senate the same as big ones many times their size? The federal analogy, Warren declared, “is inapposite and irrelevant to state legislative districts.” For one thing, he wrote, states at least theoretically and at the beginning, were sovereign entities giving up some of their status to make the federal union work. Counties, cities and other subdivisions, by contrast, are all children of the states that exist only to help the states carry out their work.

Justice Warren also, rather breezily, dismissed other arguments for legislative districts with unequal numbers. Trees don’t vote, he wrote. Citizens do. And as for the problem of sparsely populated areas having districts so large that effective representation was hard, he thought that in he mid-60s transportation and communication had progressed far enough to make that point disappear.

So what’s the remedy for the frustrated red majorities in 28 of our counties if, in state politics, they don’t want to be dominated by the bigger majorities in eight blue counties for the rest of their lives? Keep electing county and other local officials who share their dismay and can at least, sometimes, put up a bit of a fight. You’ve heard of “resistance,” a loaded term bandied about far too often lately? Looking at the map, it might work both ways. (hh)


7 responses to “No hope: One senator per county”