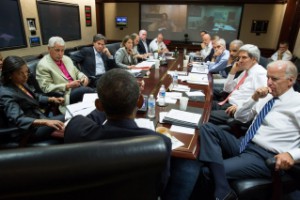 The president holds a meeting on Syria with top advisers. (White House photo)

Generally it’s a good rule of thumb to be in favor of anything that Portland protesters are against. The rule was tested, though, when according to a report in the Oregonian, 175 people staged a protest there against U.S. involvement in the Syrian civil war.

The demonstrators demanded that the government rule out military intervention, including the brief Navy bombardment that President Obama has said he wants to launch if Congress authorizes it. One of the protesters cited Americans’ war-weariness. The trouble with wars and conflicts generally is that being weary of them does not prevent them.

At the moment it looks as though the entire Near or Middle East is going to cause the world trouble for years to come. Afghanistan faces even more strife from the Taliban after most U.S. troops are withdrawn. Iraq is seeing an upswing in bombings. Egypt is in turmoil. And the outlook for Syria is thoroughly bad. The danger is that all this will flare up into a general war, whether we are weary or not.

It’s not clear that the current mess could have been prevented, or that the United States has any way to influence events. All we know is that what we’ve done so far has not prevented the problems. But it’s obvious that a few cruise missiles blowing things up in Syria will not solve anything. We need our leaders to devise a better plan than that. (hh)

From Mary Grace, via Facebook: WOW!  I haven’t heard about putting boots on Syrian soil, Hasso.  I do think that we should slap him around a little cause like children, if you let one get away with it the rest think they can and the biggest arsenal of chemical weapons is in the hands of none other than North Korea…kind of close to home for me.  Besides he broke international law by using them.  Been on the books since after WWI and that mess. We let too many get away with it already. Time to stand up to them.  Not a war, just a slat to get their leader’s attention and say, “No more…ya hear now.”