No ‘deposit or discharge’ allowed 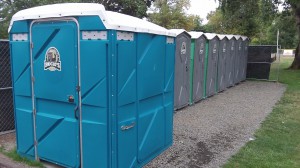 Not every place is as well equipped in this regard as Albany’s Bryant Park.

This is kind of indelicate, so be warned. The Albany City Council, as you may have heard, has passed a couple of ordinances to give the police more enforcement tools against vagrants that cause trouble. One new city law outlaws open containers of alcohol in a public place. No problem with that. The other ordinance prohibits, literally, “the deposit or discharge of human waste on public property.”  And that could be a problem.

Say you are homeless. You can’t be on private property because if you are, somebody may shoot you or chase you away. So public property is the only place where you can be. And now, if you’re resting in a remote corner of some public land and nature calls, there is no way you can avoid breaking the law and committing a misdemeanor for which you could be taken to jail.

Everybody can see the problem with people fouling public property. But what choice do some hapless people have if facilities are not within reach? So in order for punishment for a violation under this ordinance to be fair, there must have been some alternative that the offender refused to use. In short, there will have to be far more public restrooms in out-of-the way places.

How that can be accomplished I have no idea. But without it, I don’t see how a court can fairly punish someone for a “deposit or discharge” of that particular kind. (hh)

From Christine Ruck, via Facebook: Unfortunately, some of the sheltered areas (are) adjacent to large landscaping or covered parking around vacant buildings. How attractive is a business location if it has also been used as a litter box?