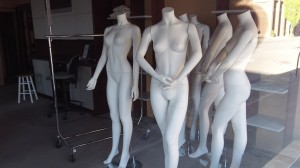 This downtown shop window has nothing to do with urban renewal, or does it?

When Albany voters decide on a bond for new police and fire stations in November, they can be sure that approval of the bond will not benefit the downtown urban renewal district, CARA.

Why would it, you might reasonably ask, even though we’ve covered this subject before. Well, money to repay the $20.3 million bond issue over 20 years will come from property taxes. (Because an existing city bond is expiring, the tax rate will stay the same.) And the way urban renewal or tax increment financing works in Oregon, districts such as CARA receive a portion of taxes collected within the district for all purposes, including bond repayments.

This makes no sense and gives people who question the urban renewal program a reason to oppose any bond issue. But on Wednesday, the city council, doubling as the CARA governing agency, voted unanimously for a resolution declaring CARA does not intend to benefit financially from any future bond issue and spelling out two ways of carrying out that intent.

In the words of urban renewal manager Kate Porsche, in this way Albany mimics a new law that exempts special levies from the urban renewal tax. The 2013 legislature did not include bond issues in this change, so Albany is doing what it can. It tells citizens that of the proposed bond tax for police and fire stations, none will go for urban renewal instead. (hh)

From Gordon L. Shadle:  The council should do the same for every voter-approved bond and levy that CARA siphons money from, including the Linn County Law Enforcement levy, the Vet’s Home levy, the LBCC Bond, the GAPS Bond, the City’s Police/Fire levy, and the current City Bond. It comes to over $600K last year alone.
The principle is that monies should not be diverted to a purpose other than the one stated in the ballot measure that voter’s approved.
I’ll give a polite “golf clap” to the Council/ARA for honoring the principle on the new City bonds. But the principle applies to every voter-approved measure. To earn a full-throated cheer, the council needs to do the right thing on every voter-approved property tax measure.