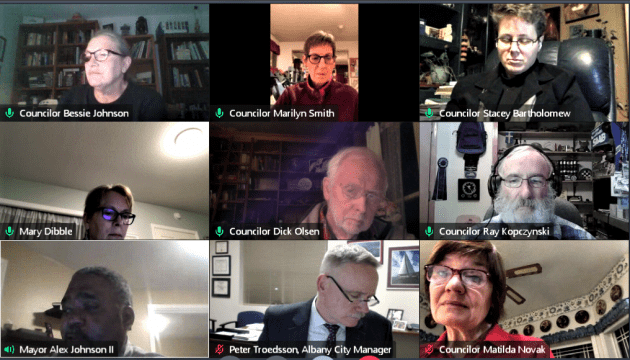 The Albany City Council (plus the city manager and clerk) at the conclusion of its Wednesday session.

Wednesday was the night of the purge in three of the volunteer commissions that advise the Albany City Council, something that I can’t remember happening before.

It also kicked two members off the Community Development Commission, which considers how the city spends federal housing funds. And it booted two members of the planning commission just before a crucial hearing on a big apartment complex on the river.

Perkins, a conservative who regularly runs for federal office and last fall was the Republican candidate for U.S. Senate, was part of the demonstration in D.C. that culminated in the storming of the Capitol on Jan. 6.

Because of her views, her presence on the Human Relations Commission had caused consternation last year, and the board ceased to function for a time after other members quit.

At the close of Wednesday’s council meeting, Councilwoman Marilyn Smith made an unscheduled motion to rid the commission of Perkins. It passed 4-2, with Councilors Ray Kopcynski and Matilda Novak opposed. Kopczynski thought the dismissal was the start of a slippery slope toward punishing people for their political views.

On the planning commission, the council approved a request by Mayor Alex Johnson to remove members Ann Ketter and Therese Waterhous. He gave no reasons except that he had researched the matter and it was his prerogative to make the change. (Smith and Councilman Dick Olsen opposed the dismissal of Ketter,)

Both Ketter and Waterhous had voted against allowing developers of the proposed “The Banks” riverside apartment complex on the Willamette River to increase their project from 105 to 120 units and change the layout, a change opposed by nearby residents who fear the complex will overwhelm their neighborhood.

The larger apartment proposal comes before the planning commission again on Feb. 1.

The mayor named two replacements for the ousted planning members: Sonja Neperud, a real estate broker and property manager, and Theodore Bunch, whose resume says he works as a “technical specialist/policy analyst” for the Oregon OSHA.

On the Community Development Commission, the council approved the mayor’s move to replace Stephanie Newton and David Abarr with new members Dana Morris and Kenneth Larson. Only Olsen opposed this.

Usually, when people leave any of the city’s volunteer advisory groups, the council votes to send them a letter of thanks for their service. This time there was none of this. Of course I can’t remember a case of anyone being dismissed from these volunteer positions before his term was up. (hh)

The story was edited to correct the work information for Theodore Bunch.


40 responses to “Night of the Purge: Council fires 5 volunteers”