Nice screens but, alas, no tunes 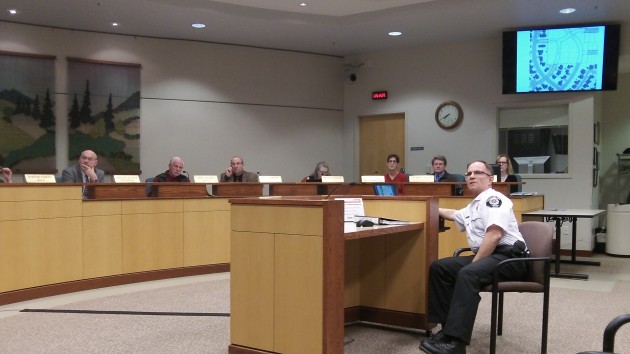 Fire Marshal Mike Trabue and the Albany council study a street map on one screen while the audience can see the other.

Let us turn away for a moment from the drama at the top of our state government and, instead, cast our eyes upward in the Albany City Council chambers. There, we can admire the latest in visual aids, two high-definition screens on opposite sides of the room.

On Wednesday the screens came in handy, allowing both the council and the audience to study a map of a proposed street name change in a southeast neighborhood, a change made necessary because an adjacent new subdivision is turning two cul-de-sacs into streets. (Unfortunately that entails changing three or four address numbers as well so that they are in the conventional order as an aid to the fire department. It’s a nuisance to affected homeowners, which caused Councilor Rich Kellum to delay passage of the change to the next meeting.)

The screens are hardwired to a laptop and replace the previous setup, which involved a projector that operated wirelessly but sometimes didn’t work at all. “Councilors and others had been dissatisfied with the viewing angle for the one screen,” explains Marilyn Smith of the city manager’s office. “It was inadequate for much of the room. Months ago, they had asked staff to look into some options so more people could see presentations.”

To make that easier, one of the new screens is angled slightly toward the council, the other toward the audience. The system was installed in January and cost $3,259, including the two Vizio high-definition screens, a switch and splitter plus cables.

When they’re not needed to illustrate council issues with maps or graphs, the screens’ “wallpaper” shows a close-up view of a keyboard. That made me think that a little piano music might be nice to go with the image, the Moonlight Sonata perhaps or something featuring Dave Brubeck. Maybe that comes next. (hh) 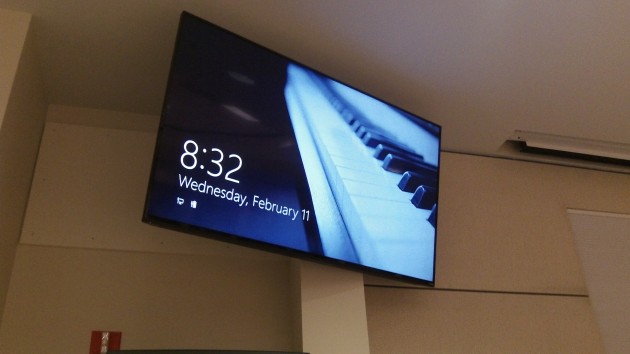