Stepping out on the beach near the mouth of the Yachats River on Friday, I was astonished at the number of seagulls gathered there in two gigantic flocks. And I was encouraged at the slow — nay, imperceptible — pace of the rise in the sea level we hear so much about.

In 2015, scientists published studies showing an alarming decline in the number of seabirds, gulls included, on the Pacific coast. They blamed a decline in certain small fish species and other creatures that provide the diet for many birds that spend much of their time at sea. Maybe that’s what drives gulls inland, to the point where lately I’ve seen a few scrounging for scraps in the parking lots of Albany stores.

So, coming across a whole bunch of gulls on the beach, where they belong, seems to me to be a good sign. Evidently they were finding something to eat in the shallows where the surf petered out.

Another notable sight was that the beach had entirely covered up the rocky outcroppings normally visible there. Sand on the coast migrates, I think we’ve been told. It goes away for a season and then, in due course, it comes back. And it was nice to see, once again, that the pattern persists. 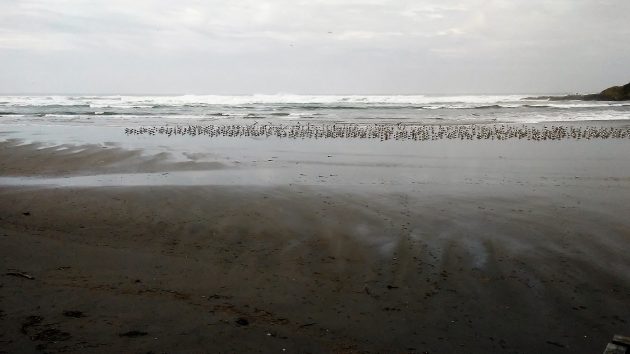 No rocky outcroppings sticking out of the sand, but they’re under there somewhere.

Then there’s the general level of the sea. In March, stories in the Washington Post and elsewhere reported on a new study — based on models — projecting that the oceans would rise much faster than previously thought because of man-made climate change. Apparently they found that melting in Antarctica would have a bigger effect than assumed before. So at the end of the century cities like Miami and New York, not to mention New Orleans, would be pretty much doomed.

You can’t see any of this by standing on an Oregon beach and watching the gulls and the waves. But we also don’t have to worry about it much. Scientists  tell us to expect a killer earthquake and tsunami on the Oregon coast. The Big One could come not a century from now but at any time, so we have that for which to prepare. (hh) 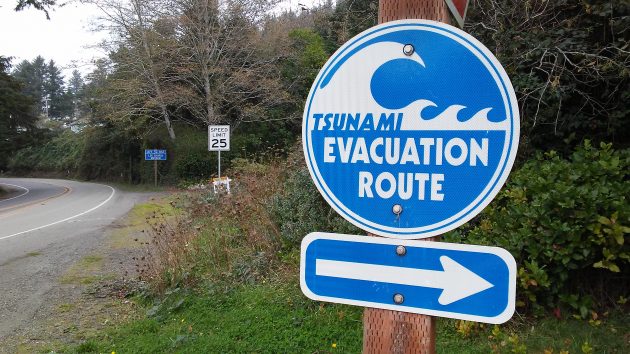 An indication of a threat possibly more immediate than a gradual rise in the level of the sea.


3 responses to “Nice day at the beach: Gulls, sand, sea”