Nice bike lanes; why so short? 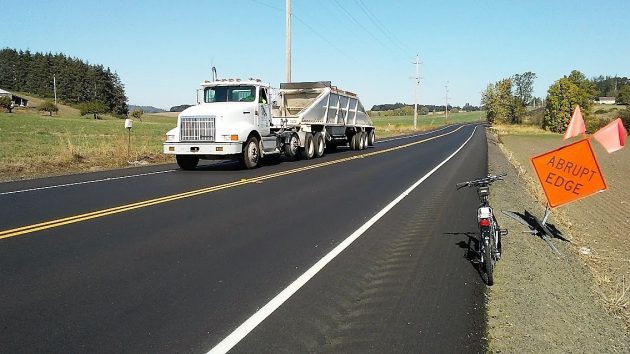 Bike lanes along this newly widened section of Independence Highway are about 5 feet wide.

Independence Highway in Benton County has a nice new surface, and a section of the road is wider too, prompting a reader’s question for which the Answer Man hastened to obtain a response.

“Have you looked into or heard the reasoning for widening the small section of Independence Highway that they did between Metge and Ryals?” Shane Lyon wanted to know. “When they started the project I assumed they would be widening it for bike traffic from North Albany to Highway 20. Just curious.”

When I asked, Benton County Public Works Director Josh Wheeler promptly replied. “We only had enough money to widen for bike traffic in that section,” he wrote. “We also chose that section because of the potential of connection between North Albany and Adair Village. We have future widening projects planned on Ryals and Oak Grove/Metge.”

Also, he added, that section was the most cost-effective to engineer and didn’t require buying additional right of way.

Benton County resurfaced sections of Independence Highway between Highway 20 and Pettibone Road and between Ryals Avenue and Camp Adair Road in 2016. This summer, the section from Pettibone to Ryals got a double chip seal treatment, and the widening from Metge to Ryals — a distance of 3,120 feet according to Google maps — was part of that. The county said it used its share of fuel taxes and dumping fees at the Coffin Buttte landfill to pay for both phases, estimated to total $600,000. North Santiam Paving did the work on both phases.

Wheeler didn’t provide a time frame for adding shoulders wide enough for safer bike traffic on the other roads he mentioned, Oak Grove Drive, Metge and Ryals. At one time last year, this was being contemplated as one of the alternatives to an Albany-Corvallis bikeway.

In the end the county decided to pursue a more direct route in the Highway 20 corridor. Still, widening those roads would certainly help, even if for commuting it’s out of the way and impractical. Unless, that is, you take a lot of bike rides from North Albany to the Sweet Taste coffee and ice cream shop in Adair, which is certainly a worthwhile thing to do. (hh) 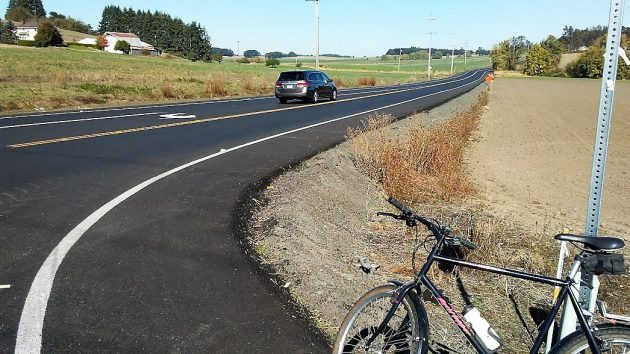 The wider section goes north from here, at the corner of Independence and Metge Avenue.


5 responses to “Nice bike lanes; why so short?”