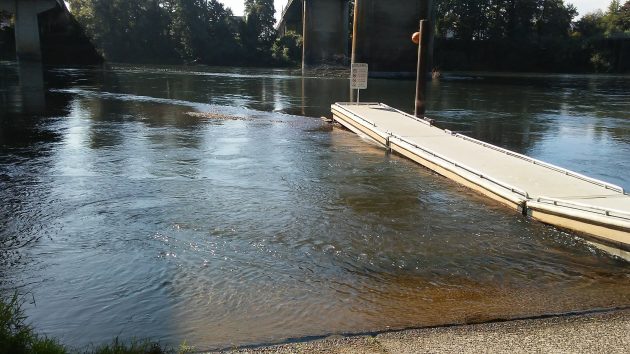 The Takena Landing dock in Albany this morning: The rising river has nearly covered the gravel bar that will be removed shortly.

Starting in August 2020, Oregon will start charging a permit fee to get out on the water in motorless boats of 10 feet or longer, such as canoes and drift boats.

The legislature this year passed Senate Bill 47, which provides for a “waterway access permit” and says: “A person 14 years of age or older shall carry a waterway access permit while operating a nonmotorized boat that is at least 10 feet in length or a sailboat that is at least 10 feet but less than 12 feet in length… The person shall present proof of a permit upon request by a peace officer.”

For several years now, the state has required boaters to have an “invasive species permit” to raise money for a program to prevent certain animal and plant species from invading Oregon waters. SB 47 repeals the species permit, which generally costs $7 a year, and substitutes the waterway access permit, which will cost $5 for one week, or $17 a year, or $30 for two years.

The bill takes effect in October, but the access permit won’t be required until Aug. 1, 2020. The extra time is intended to allow the Oregon Marine Board to adopt rules.

I didn’t know about the access permit until reading a newsletter from Sen. Floyd Prozanski, D-Eugene, this week.

The bill says the permit fees will go into a Marine Board fund to pay for improving access points to waterways such as ramps and related facilities.

Owners of motorized boats and sailboats bigger than 12 feet already pay a biennial registration fee. They are not affected by the new access permit fee.

Reading the bill reminded me of the “water access” at Albany’s Takena Landing. The city has contracted with R.L. Reimers Construction to excavate a gravel bar there, which has made the boat ramp hard to use this summer. As of this morning the work had not yet started, but the Willamette River had risen enough to almost cover the bar.

Once the bar is gone, there’s no way of telling whether it will reappear during the winter and spring. Boaters will hope that by the time they pay the new state access fee, the access at Takena will actually be clear. (hh)

10 responses to “Next year, state to charge for waterway access”