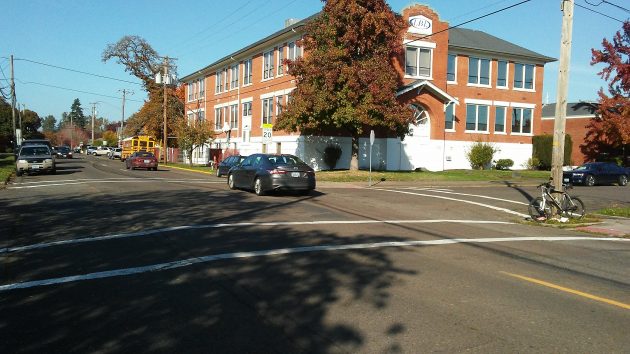 We’re looking north on Madison Street in Albany from the intersection of Fourth Avenue. It’s one of several points on Madison where green paint is intended to make for fewer crashes involving bicycles and cars.

Ron Irish, Albany’s transportation systems analyst, says Madison Avenue is one of two places in Albany where green paint on the pavement is planned as part of ODOT-sponsored safety projects. On Tuesday he told the Albany Bicycle and Pedestrian Commission he expects the work to be done next summer.

On Madison, at the intersections from First through Seventh Avenue, the idea is to paint bike lanes on both the east and west sides of each intersection. Why? Because there have been a number of car-bike crashes over the last five years or so.

Green paint on the pavement is supposed to be useful in places of potential conflicts between bikes and cars. The paint is thought to alert drivers to the possible presence of cyclists they otherwise might not see.  Madison was chosen for this project because of the number of crashes — about one-quarter of all bike-car crashes in Albany, Irish said — and because it’s a main bike route. Though the pavement is pretty rough, the city’s transportation systems plan designates the street as a “bike boulevard.”

The other place where green paint is to be applied is the intersection of Queen Avenue and Geary Street, where the main part of the ODOT safety project is to modernize the signals, especially for left turns.

Green paint on bike lanes has been used for some time elsewhere in Oregon. But these will be the first installations of their kind in Albany. (hh)


5 responses to “Next year, expect to see green lanes here”