Next legislature: An editorialist’s feast! 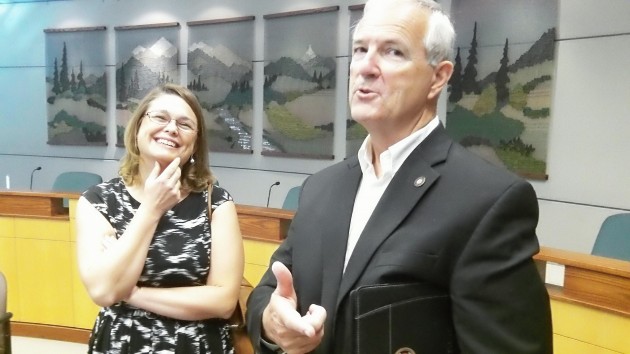 Sara Gelser has to laugh as Andy Olson makes a crack about having his picture taken after a campaign forum at Albany City Hall in September.

What can we expect from the 2015 Oregon legislature? I put the question to Rep. Andy Olson, R-Albany, who was unopposed in winning another two-year term in the House, and Sen.-elect Sara Gelser, D-Corvallis, who will replace Republican Betsy Close of Albany in January.

Gelser will attend her first Senate caucus meeting this weekend and says she’ll have a better sense of things then. Meanwhile, here’s her reply to my question about gun issues: “I was clear in the campaign that I will support legislation to require universal background checks for firearm purchases with exceptions for family member transfers to be sure firearms are not purchased by convicted felons or domestic abusers. I do not plan to introduce any gun related legislation personally.”

She’s obviously aware of concerns about such legislation on the part of law-abiding people who might be affected. “If a bill is needed to shore up the privacy protections for gun owners after they’ve gone through the background check or to ensure that the background check system is easy to use and doesn’t create unnecessary delays/expense for private sellers, I am open to that,” Gelser says in an email.

And she’s willing to learn more. “I have a friend (a strong gun rights advocate) who has invited me to go with her to purchase firearms through a variety of points of sale (including a private sale, a store sale, and a gun show sale) so I can see first hand how it works before we get into session.  I’m always grateful for those kinds of opportunities.”

While Gelser will be part of a larger Democratic majority in the Senate, Rep. Olson will serve with a smaller Republican minority in the House. It sounds as though he expects a wave of Democratic proposals.

“I have heard that the 30-hour sick leave impacting small business, similar to what Portland has implemented and Eugene Council voted 4-2 for, will be on the table as a statewide issue,” he writes in an email. “I have heard that a measure supporting $15 an hour for minimum wage will be there as well.”

Beyond that, “You should see more environmental bills, and yes, the Second Amendment will be addressed. I would imagine that a tax will be placed on electronic cigarettes, probably based upon volume, and the owners of hybrid cars will see something coming their way capturing an equal use tax for the roads. Authorization to state agencies for increasing fines and fees will also blossom more than ever.”

If he’s right, life in Oregon, especially if you’re in business, will get more expensive. Whether it does or not, there’s good news for me: No shortage of contentious issues about which to write. (hh)


3 responses to “Next legislature: An editorialist’s feast!”