On the last day of 2014, part of Albany’s Bryant Park was still under water, as it had been for a week or two. This was not unusual for the season. What was unusual was that near the edges of this temporary lake, ice had formed.

No, it wasn’t thick enough to skate on. And the chances were slim to none that it would get much thicker. Forecasters were telling us that the subfreezing nighttime lows would end by the weekend.

That was the good news in the forecast. The bad news was that the Weather Service predicted daytime fog for the next couple of days. Considering the season, that would be a the kind of fog that chills you to the bone.

Our weather choices this time of year — early winter — are never all that great. If it’s not clear and freezing, it’s overcast and merely cold. The other main alternative is not so cold but raining. Or, when a frozen spell is about to end with an approaching storm, there’s always the chance of freezing rain.

It could be worse, I know. We could have the kind of winters they have in Montana or Wyoming. Or the Midwest. So we have no reason to complain. Still, winter is the reason why to some of us, all the hand-wringing about global warming sounds more like wishful thinking. (hh) 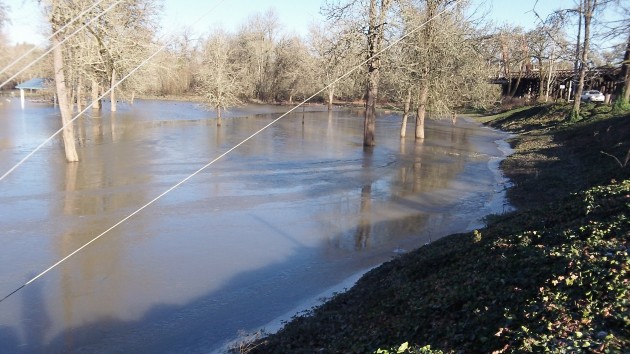 A thin crust of ice along the edge of Bryant Pond, er, Park.