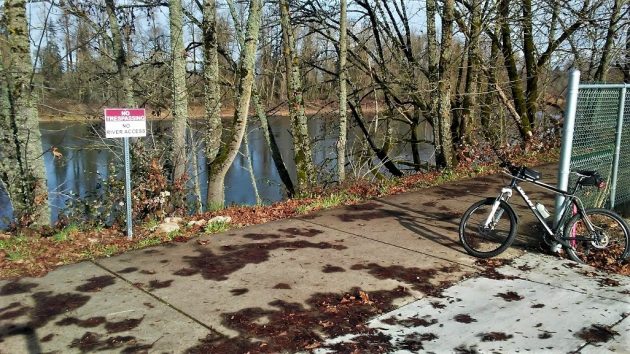 With the riverside foliage gone, the Dave Clark Path offers a good view of the Willamette River.

New signs have sprouted along a segment of Albany’s Dave Clark Path, opening the possibility that people could be cited for trespassing if they camp on the riverbank below.

The signs went up this week where the path runs along the Edgewater Village subdivision. The question of citing unwanted campers came up during a Nov. 5 city council meeting.

The steeply sloping bank below the path, down to the high water line, belongs to the Edgewater property owners. The developers had offered the bank to the city as a gift, but the council declined.

If the bank was public property, city authorities under a recent federal court ruling (in Idaho) probably could not bar people from sleeping there. But private landowners could prohibit trespassing, and if they saw anybody there they could call the cops.

And that, I presume, is why the no-trespassing sign are now in place. The city didn’t put them up, and neither did an Edgewater homeowner who in September organized a meeting with city officials about the messes left by unauthorized campers below the path. Which leaves the Edgewater developers or homeowners’ association as the likely party.

Whether anybody actually gets cited into court, I have my doubts. In fall and winter, with the foliage gone, you have a pretty good view of the bank and the river. I haven’t seen anybody down there on recent rides. And in summer, it’s hard to see anybody through the leaves on the thickly wooded bank. (hh) 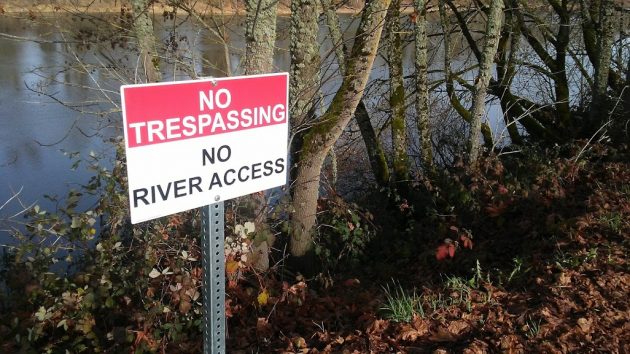 One of the new signs on the river side of the Dave Clark Path.


11 responses to “New warning signs on the Clark Path”