New start for a site with a sad story – Hasso Hering

New start for a site with a sad story 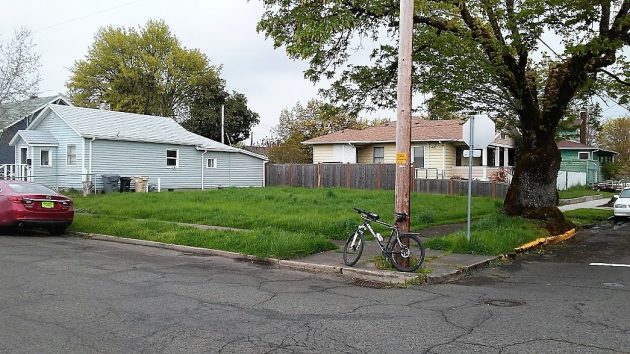 This lot at Sixth and Railroad, photographed in April, has been vacant since the city of Albany tore down a house there in 2011.

Seven years after Albany officials forced the demolition of an old house kitty-corner from Swanson Park, new owners have applied to build a home there.

The Albany Landmarks Advisory Commission will hold a public hearing at 6 p.m. Wednesday, Sept. 5, at City Hall on the request by Moises and Elaine Moreno to build a two-story house with an attached garage at 337 Sixth Ave. S.E. The Morenos need Landmarks’ approval because the address is in the Hackleman Historic District.

The public notice of the hearing caught my eye because I covered the controversy over the century-old house that used to sit there. The city building official had declared it to be dangerous because the structure, dating to 1890 or before, had been divided into up to six living spaces in ways the city deemed unsafe.

The city condemned the building and evicted the tenants in 2009. The owner, Richard F. Draper, made alterations but didn’t take out the required permits. He told me later that without income from tenants, he didn’t have the means to bring the heavily mortgaged place up to code.

The story ended on Aug. 5, 2011, when contractors for the city demolished the house and carted off the rubble. Draper lived across Sixth Avenue and watched along with several others including me. Some time before, the city council had voted 3-2 against developer Scott Lepman’s proposal to buy the place and fix it up with urban renewal funds.

Draper died on Oct. 15 the following year, 2012, at the age of 83. As a young man he had come to Albany to build houses with his brothers and his dad.

County tax records show the current owners bought the vacant lot for $25,000 in October 2015. Now they’ll build something new in this old neighborhood. From the sketch attached to their application, it looks to be about 1,800 square feet, with a covered patio and front door off Railroad Street. Let’s wish them luck. The story of their lot was sad, but its new chapter will be a new start. (hh)

This story has been edited to fix a mistake in the address. It’s S.E., of course, not S.W. as in the original.