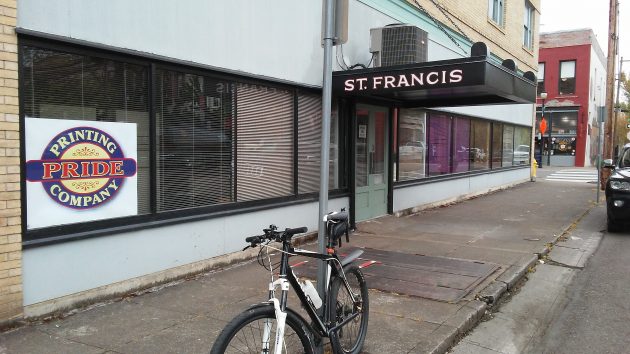 The name on the canopy almost invites you to come in and book a room, doesn’t it?

Albany has no more downtown hotels, as it did long ago when there were several, but now it does have a restored hotel canopy that brings back memories of that bygone era.

The awning above what used to be the Ferry Street lobby entrance of the former St. Francis Hotel has been repaired, put back up and adorned with lettering that mimics what used to be there when the hotel was open. That era ended no later than the 1960s, and the canopy was clad with sheet metal, obscuring the old name.

In November last year, a Portland & Western Railroad maintenance truck turning on to Ferry Street snagged the sign and mangled it. The railroad paid for repairs, and a few weeks ago the canopy was put back up. Monday was the first time I had noticed that the name had reappeared as well.

For decades, the ground floor of the former hotel has housed Pride Printing. I was out of town this week and asked the owner, Scott Thorn, to tell me by email about the restoration of the canopy and sign. His reply:

“Top use Form Contracting here in Albany did the awning. Gabe and Cody were great guys to deal with. Neil Zawicki from Hondo Creations out of Independence, OR, made a stencil from the original signs and hand painted it on as close as we could to match the old color. We think it turned out pretty cool. It was a long drawn-out process but I think it’s the nicest part of the building. For now anyway.”

The upper three floors of the building are vacant and deteriorating. It has long been the hope of people interested in downtown revival that the St. Francis could be remodeled and used for some kind of housing. But in March, after a detailed study of the economics involved, a group of students from the University of Oregon concluded that remodeling the upper floors as apartments and the ground floor as commercial space was not feasible from a business standpoint. The likely return would not justify the several million dollars that a conversion would cost.

So the new sign — the appearance rather than the reality of a residential building — will have to do until conditions change. (hh)

10 responses to “New sign evokes an era long ago”