New playground comes with a ‘warning’ 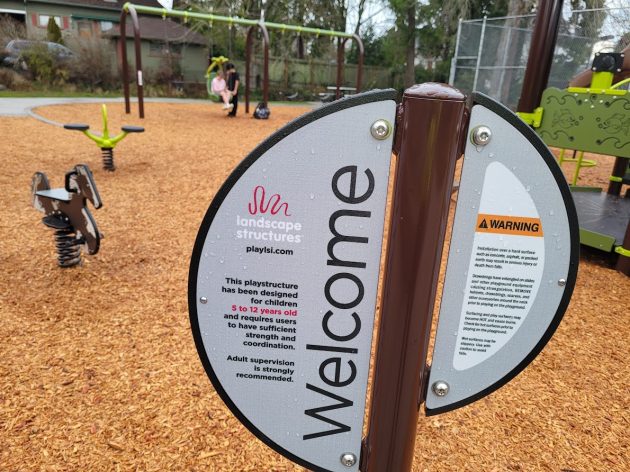 The “welcome” sign at Albany’s new Henderson Park comes with a warning in small print.

The new playground at Albany’s Henderson Park is more elaborate than the one it replaced. It also comes with a warning that falling from the equipment on hard ground could result in death.

I’ve written before about the $175,000 project to update the layout and the play equipment at the park in the 800 block of Calapooia Street. Since the last update in November, the new playground has been installed and the park reopened for public use.

I had not seen the finished product until I went by there Friday on the bike. (Actually, not really “finished,” as explained below.)

The “welcome” sign is similar to the age recommendations on children’s toys. The intended age range at Henderson is 5-12.

A smaller sign lists the risks of playing there.

“Installation over a hard surface such as concrete, asphalt, or packed earth may result in serious injury or death from falls,” it says.

The ground is covered with wood shavings, but presumably the sign came with the equipment from the manufacturer and was meant to cover all contingencies.

Other supposed risks named on the sign are strangulation from drawstrings if they’re not removed first, helmet straps, or scarves around the neck, or getting burned by surfaces heated by the sun, or slipping when it’s wet.

Other than that, kids, go have fun.

What I didn’t see when I looked around Friday was a sign acknowledging Maude Henderson or Amanda Johnson.

Miss Henderson, who died in 1935, willed her house to the city with instructions to build a park there.

Mrs. Johnson lived in Maude’s house and under Maude’s care until her death in 1927. She had come to Oregon with Maude’s grandmother in the 1850s.

Amanda was the widow of Ben Johnson. Both were Oregon pioneers who were born into slavery. As children, they reached Oregon in the 1850s on a wagon train with the families that freed them.

At least two other parks, Bryant and Hackleman, have plaques recognizing the pioneer families that gave the land on which the parks sit.

At Henderson Park, a plaque reminding coming generations of the history of the place would be a welcome touch. (hh) 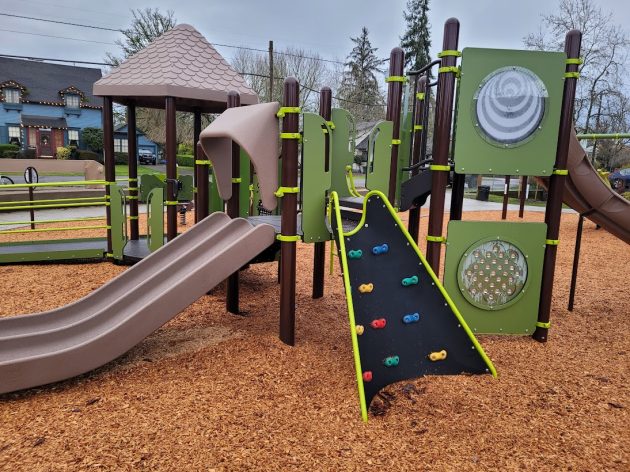 The new play equipment at Henderson Park, with wood chips on the ground below. 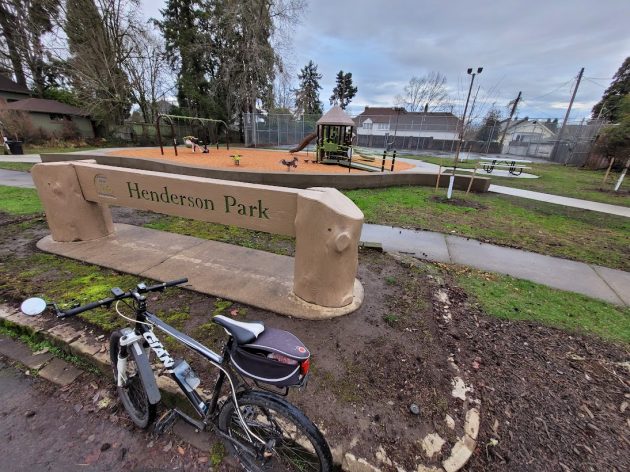 The old nameplate. massively clunky though it looks, has been reinstalled.

When the playground was installed, we decided to open the park back up for play even though we have not completed all of the fit and finish. We didn’t want to keep kiddos off any longer than necessary. The team is still working on quite a few additional items before we consider the park complete.  Items include:

We still have quite the list, but we are so thankful to be moving in the right direction.  We hope to have it all completed late spring/early summer for a ribbon cutting and celebration.


10 responses to “New playground comes with a ‘warning’”