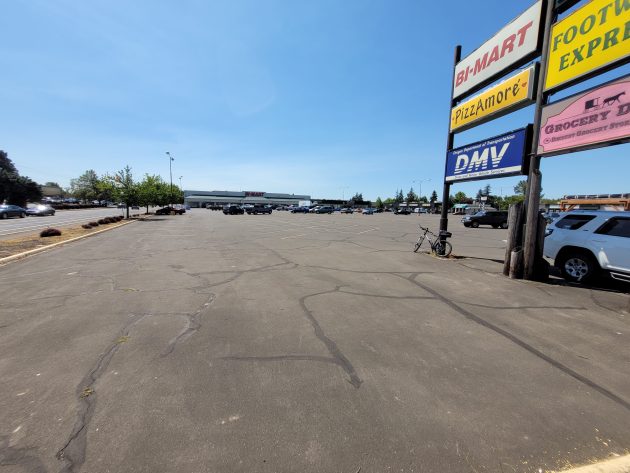 There’s a lot of unused space –or was when the photo was taken Aug. 6 — in this corner of the Bi-Mart parking lot at Clay Street and Santiam Highway.

Except for a coffee kiosk, the southwest corner of Santiam Highway and Clay Street in Albany looks pretty empty most of the time. That might change under new ownership of the land.

A real estate investment group named LRG and based in Walcut Creek, Calif., bought the commercial property this past March for just over $9.5 million.

The property includes the Albany Bi-Mart store and several other tenants including the Sizzler restaurant, plus the Albany office of the Oregon DMV.

LRG has filed an application with the city of Albany Community Development Department to divide the 6.88-acre property into five lots. Owners within 300 feet have been notified, and Friday is the last day for them to comment.

A plat of the tentative subdivision, prepared by K&D Engineering of Albany, contains a notice concerning Lot 2, the one at the corner of Santiam and Clay.

It says the corner lot would be a temporary easement for access to the other four lots. But the easement is “to be removed prior to the development and sale of Lot 2.”

It says nothing about when that sale might take place or what the development would be.

For several years, the former Signs of Victory Mission would set up a Christmas tree lot on that corner.  The land is zoned for “regional commercial” use. So if and when the corner is developed, chances are it won’t be to sell Christmas trees. (hh)