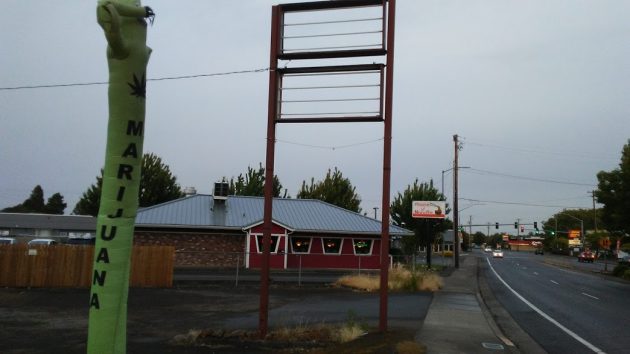 Empty signs like this have to be filled, the code says, with a blank if necessary.

Albany has a revised sign code, but I can’t see that it will make a noticeable difference in the bewildering array of signs in many of the commercial parts of  town.

The city council adopted the sign regulations Wednesday night as an amendment to the city’s development code, and they’ll take effect in 30 days.

The council was told that the revision’s goal was to make the code content-neutral in response to a Supreme Court decision in an Arizona case from 2015. With few exceptions, government is not supposed to be in the business of regulating speech or, in this case, the messages in signs.

The revision won’t make much difference in practice. As far as I can remember, Albany has never regulated signs based on what they said. But there was always the remote possibility that, in these contentious times, somebody might take offense at some obscure provision in the old sign code and take the city to court.

The revision makes one little change. A subsection was added “to prevent vacant sign frames.” It requires that a blank sign face be installed if necessary.

Councilor Rich Kellum wanted to know how long the owner of a vacant sign frame, like the one in front of a marijuana shop at Santiam and Pacific, would have to comply with that change. Planning officials weren’t sure, as far as I could tell.

When I was looking at that empty sign frame, which has been there for years without anybody complaining, I could not help noticing the waving tube in front of the cannabis shop. There’s nothing in the old or new code specifically mentioning those waving things, which have popped up lots of places.

Also not mentioned in the code is anything about signs that make noise, as the motors and fans of those big waving wands certainly do. You may not notice it when driving by. But as the video below demonstrates, while the code is silent, those things are loud. (hh)