On the new and almost-open bikeway along Highway 34 west from Riverside Drive, it’s noisy but not nearly as noisy as my video makes it seem. The combination of traffic and wind played havoc with the little microphone on my camera. Still, I enjoyed Wednesday’s test ride on the part of the bikeway that’s now completely paved and open, from Riverside to Colorado Lake Drive.

West of there, the path is paved too, but the bridge over Owl Creek is still being worked on and impassable. I started to ride toward the bridge on the newly paved path, but the operator of an excavator, working on moving around some crushed rock, told me he would rather I didn’t. So to get a look at the bridge, I took my life in my hands and rode along the  highway shoulder instead. Then, to get back on the same narrow strip, I walked next to the guardrail, preferring not to try to cross the highway or make like a salmon and ride against the flow of traffic on the side I was on.

The completion date for this ODOT contract is Oct. 31, and it looks as though the contractor will need most of the remaining time to finish work on the bridge. When it’s done, the bike route from Albany to Corvallis and back on Riverside Drive and the new bikeway — 40-50 minutes each way unless you’re racing —  should make for an enjoyable ride. (hh)

Checking out the Owl Creek bridge from the highway. 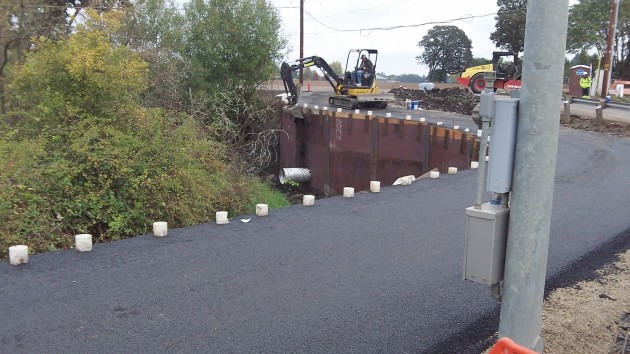 
One response to “New bikeway: A noisy test ride”