Neighbors pay the fee and appeal ‘The Banks’ – Hasso Hering

Neighbors pay the fee and appeal ‘The Banks’ 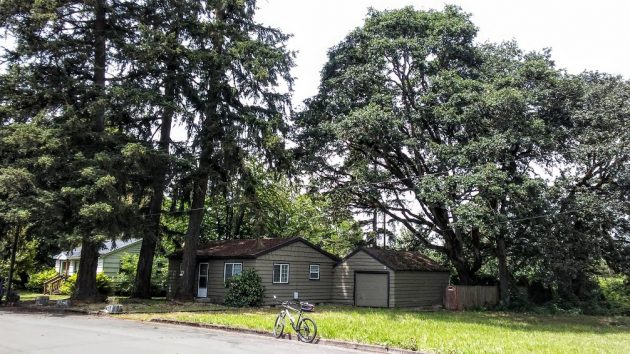 This is Linn Avenue, where The Banks project would have apartment buildings facing the street.

Neighbors opposed to the proposed 120-unit apartment complex called The Banks have passed the hat and collected enough money to cover the filing fee for an appeal, and today the appeal was filed.

This means the project will be heard by the Albany Planning Commission. Melissa Anderson of the city planning division said the staff intends to schedule the public hearing before the commission for Monday, Aug. 31.

The planning commission approved the first site plan for the project, along with related permits, about a year ago. The issue now is a request by the property owners and developers, Salem-based Willamette River View Holdings II, to change the layout and increase the number of apartments from 105 to 120 .

The planning staff approved the changes on July 17. Nearby residents object, saying the changes are significant enough so that they should be reviewed by the planning commission, the same way it was done a year ago.

Last week, the city council voted 5-1 against a request by Mary Abraham, one of the neighbors, to waive the $303 appeal fee. A formal appeal complete with fee was not required the first time the commission handled this, and the same process should be applied now, the neighbors say.

But the council majority agreed with Councilor Rich Kellum, who argued that waiving fees in one case would lead to more requests for waivers.

The 6-acre site is on the Willamette River across Geary Street from Bowman Park. On the land side it fronts on Linn Avenue, where three-story apartment blocks would replace the trees and two small houses there now. (hh)

The proposed layout of apartment buildings and parking at The Banks, as submitted to the city for approval.

2 responses to “Neighbors pay the fee and appeal ‘The Banks’”