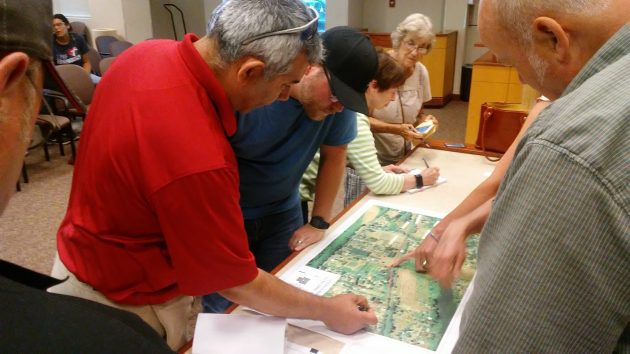 Pouring over a map of the North Albany portion of the Albany-Corvallis Bikeway Tuesday night.

About two dozen property owners showed up Tuesday for a neighborhood meeting about the North Albany segment of the planned Albany-Corvallis Bikeway. Some of them voiced questions and concerns, but the main news for me was that the project was still on and the Albany segment is scheduled to be built in 2020.

The Albany segment runs for 1.7 miles from Spring Hill Drive to Scenic Drive. Most of it follows existing roads such as Hickory Street and Thornton Lake Drive. But a segment of about one-eighth of a mile runs west across private property along the south side of the Portland & Western rail line before crossing to the north side and joining Thornton Lake Drive.

The State Transportation Improvement Plan estimates the total cost of the Albany segment at $2.4 million, of which $1.4 million is intended for construction next year. Some $682,000 was budgeted for preliminary engineering in 2016, and another $330,000 for acquiring right-of-way this year.

While it’s an ODOT project, Benton County and the city of Albany have been involved with the Albany segment. Benton County is working on other legs of the planned path, from Scenic Drive to Corvallis.

The neighborhood meeting was held as negiotiations are starting between the state and property owners about the right of way. Neighbors, some of whom had only recently bought their properties, said they were concerned mainly about loss of privacy and how the path would affect access to their land.

One man wondered whether path users would trespass on his land and ride his horses. There was a lot of talk about fences between the path and adjoining properties. Other concerns were about transients and about path maintenance, which will be up to the city.

Benton County Engineer Laurel Byer led the meeting. She’s the main local contact for matters concerning the path, and she gathered contact information of those attending to be sure they are included in any future notifications.

Even before any off-highway connection toward Corvallis is established, the project should ease access to the North Albany commercial hub from properties along the path. Residents can use the path to get to the store on a bike, or on foot, without having to brave the potentially dangerous left turn from their private roads such as Walker Lane onto Highway 20 in a car.  (hh) 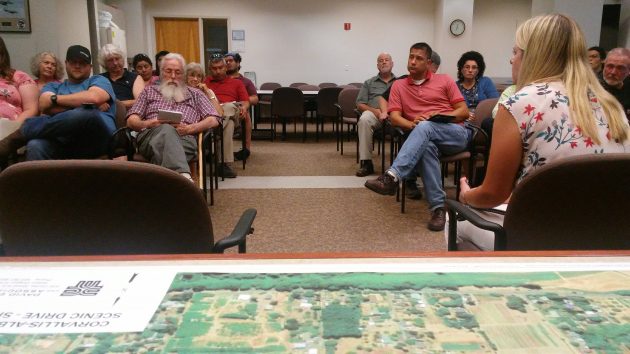 Benton County Engineer Laurel Byer, seated at right, faces the meeting of neighbors and others.