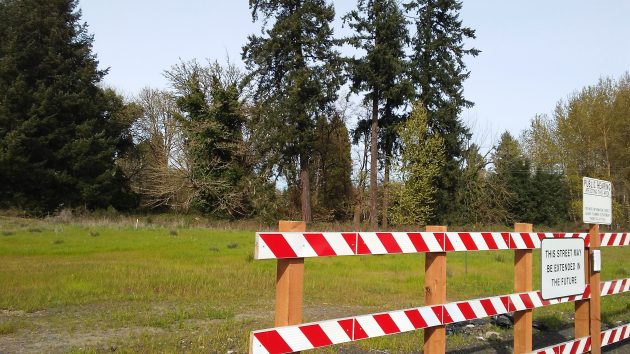 Behind this barrier on Pleasant View Way N.W. lies the 12.7 acres at issue in the zoning appeal before the Albany City Council on May 24.

The Albany City Council faces a tough choice next week in the appeal of a controversial zoning proposal. A developer from Portland wants property in North Albany to be rezoned for a housing project, and neighbors have vehemently objected. The council has to take one side or the other.

The Albany Planning Commission on April 3 unanimously denied the zone change from medium-density residential to mixed-use commercial on five parcels at the north end of Pleasant View Way even though the planning staff had recommended that it be approved.

The applicant, James Winkler and his Portland company, Winprop I LLC, appealed on April 14. In a letter, Winkler argued that the planning commission had misunderstood certain technical aspects of the application. He also charged that commission members had made “factually incorrect” statements about permitted uses rather than focusing on the review criteria applicable to this rezoning.

The city council now has to hear the entire case anew. The hearing is on the council agenda for the evening of May 24. (The staff report swelled the council’s agenda to 254 pages.)

Winkler has not been specific about what he wants to build, except to say he’s planning for housing for seniors and others who like urban living including the use of public transit. The existing zoning allows up to 317 apartments on the land. The rezoning would allow a mix of residential and commercial uses in buildings up to 50 feet high. Winkler has agreed to a cap of 192 car trips during the afternoon peak hour. That’s the amount of traffic the existing zoning might generate.

Access to the development would be at three points: Troon Street to the east, Pleasant View Way on the south, and North Albany Village shopping center on the west. 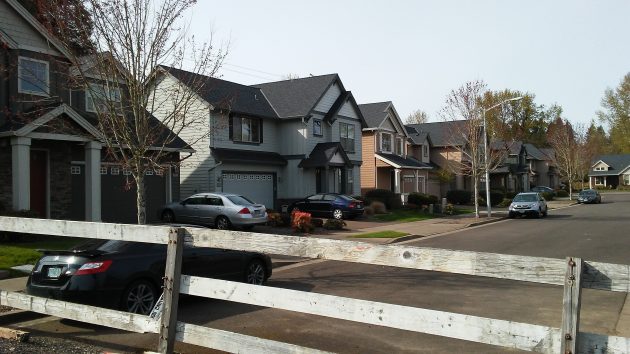 The land at issue in the Winkler zoning request lies on the other side of these houses on Troon Street in North Albany.