NA rezoning? What happens next 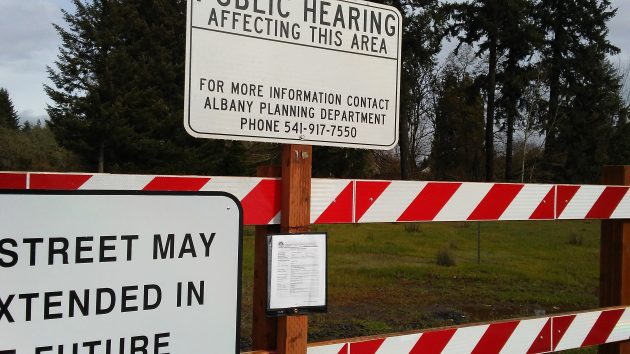 The pending zoning issue affects land behind this barricade at the end of Pleasant Way.

Last week’s Albany Planning Commission hearing on a North Albany zone change ended without resolution because the commission voted to keep the record open for additional testimony. So what happens next?

The 12.7-acre property at issue is north of Hickory Street at the end of Pleasant Way. It is zoned medium-density residential, which allows apartments up to 45 feet tall. Developer Jim Winkler of Portland is asking for a change to mixed-use commercial, which would allow a building height up to 50 feet. He says he’d like to develop family and senior housing less dependent on cars. And he has agreed to deed restrictions that would limit additional traffic to no more than the 192 peak-hour trips that would be added if the land was developed to its maximum density under existing zoning.

More than a dozen people had concerns or objected to the zone change at a hearing March 6. The commission postponed action, though, to allow more testimony, plus rebuttal testimony, and responses to any rebuttals — all in written form.

To allow for all that to play out, the planning commission will meet again on Monday, April 3, to deliberate and reach a decision. If the commission denies the change, that will be it unless the applicant appeals to the city council. If the commission votes in favor of the change, it will be in the form of a recommendation to the council. In that case, the council will hold a new public hearing. City Planner David Martineau told me the council hearing will be no sooner than April 26 and maybe later.

Nearby residents don’t know what’s proposed to be built there, and some are worried about the impact. A letter to the council from John and Lonna Hughes, who live nearby on Picardy Lane, may be typical. They are concerned whether construction will affect the flood zone. They also worry about added traffic on Pleasant Way, Hickory Street, North Albany Road and Spring Hill Drive, as well as through the North Pointe neighborhood. They wonder if nearby schools have the capacity to add students.

The couple say they saw five deer grazing in the woods where the rezoning is proposed. “We wondered what would happen to them after the humans take over their area,” they wrote. And they wished that Winkler would consider developing a senior community for people 55 and older. “That wouldn’t impact our schools and the impact on traffic (would be) much less.” (hh)

2 responses to “NA rezoning? What happens next”