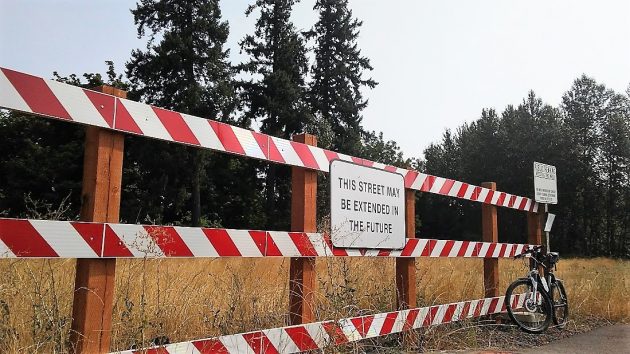 The street “may” be extended, or maybe not, depending on the outcome of a zoning struggle.

It would be convenient to live in apartments with commercial services readily available on the ground floor, but Albany zoning apparently doesn’t allow it. That’s why developer Jim Winkler asked to rezone nearly 13 vacant acres in North Albany, but almost all the neighbors are against it, and the city council Wednesday failed to approve his request.

The Winkler property is north of Hickory Street between the North Albany Village shopping center on one side and the North Pointe subdivision on the other.

The developer, from Portland, owns five tax lots. He wants to build about 200 senior apartments on the southern portion of the land and 150 apartments for working families on the rest. He also wants to incorporate commercial services for the apartment residents, things like day care centers and maybe medical offices or hair salons.

The existing zoning would allow up to about 380 apartments. At yet another public hearing on the project Wednesday, opponents worried that the “mixed use commercial” zoning Winkler sought would allow all kinds of unwanted commercial activity. They didn’t credit what he said he plans, claiming that once the zoning is changed, the property could be sold again and then another shopping center might be built. How this made sense in view of the struggles of the neighboring North Albany Village, nobody took the trouble to explain.

The city planning staff supported the rezoning request because it is in line with the mixed-use “village” concept for that area in the city’s comprehensive plan.

Councilor Dick Olsen moved to deny the rezoning, citing among his reasons what it would do to the neighborhood. His motion passed 3-2, with Ray Kopczynski and Bessie Johnson opposed. The city charter requires four votes for any council action, so the issue may come up again for a final vote on Aug. 23.

Winkler has options. He can withdraw his request and file a new one seeking to rezone only that portion of his property where he plans to build senior housing, an option he proposed on Wednesday. He could take the denial to the Land Use Board of Appeal, where he might win because the request meets the city’s criteria for such a change. Or he could give up and build all the apartments the existing medium-density residential zoning allows, without space for the additional services he wants residents to have. (hh)